#32 Let it Bleed - The Rolling Stones

This album was awesome, but I will spare you all the vagina jokes that I couldn't stop thinking of while I listened to the song "let it bleed."  I couldn't really help it with lines like "we all need someone we can cream on" "we all need someone we can bleed on"  I pictured a chorus of vaginas singing this song.  Although not many of the other lines seem to really fit.  "coke and sympathy" not so much.  unless you were smuggling coke in your vagina and were caught by a tsa agent at the radiation-station.  (PS- OPT OUT!)

Anyway, the stones are awesome!  I love them and this album was really great.  anyway, I would include a band picture, but they are all moderately to terribly unattractive.  I don't know what Kei$ha was talking about.

This album was great to listen to right after The Clash's London Calling because it feels like a cry for help.  Gimme Shelter, You Can't Always Get What You Want, both the opening and closing song of the album show that there's not much peace, there's nowhere to turn, and yeah, your life sucks, just try to live through it with cocaine and sex.  Bright message.  yay!

I want to add on a side note that in the song "You Can't Always Get What You Want" they sing about the chelsea drug store.  It was an establishment on the King's Road in London in the district of Chelsea and it is now a McDonalds.  I only know this because I lived in London briefly between my freshman and sophomore years of college, and used to eat at that McDonalds (might I add that the quality of food for McDonalds is much different in other countries- also they actually had real lettuce in their salads, which is all I ordered because meat is murder kthnxby).  When I looked it up I couldn't believe that was the very same location they were singing about.  So fun fact. 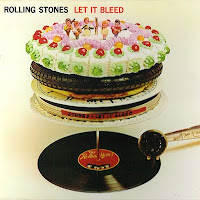 The record kicks off with the terrifying "Gimme Shelter," the song that came to symbolize not only the catastrophe of the Stones' free show at Altamont but the death of the utopian spirit of the 1960s. But the entire album, although a motley compound of country, blues and gospel fire, rattles and burns with apocalyptic cohesion: the sex-mad desperation of "Live With Me"; the murderous blues of "Midnight Rambler"; Keith Richards' lethal, biting guitar on "Monkey Man"; the epic moralism, with honky-tonk piano and massed vocal chorus, of "You Can't Always Get What You Want," which Mick Jagger wrote on acoustic guitar in his bedroom. "Somebody said that we could get the London Bach Choir," Jagger recalled, "and we said, 'That will be a laugh.'"
Posted by Katy at 5:05 PM