Trying to get through this album was like my recent three hour trip to the *genius* bar at the apple store.  That place is like a church where all the clergy have to be in wheelchairs, own square glasses or be non-white.  But if they are white, they must be outwardly gay; or at least pretend to be.  And you don't get an interview unless you have a more unconventional piercing than the interviewer.

yay.  celebrate **diversity**  Here is how it went down:

"I don't know; it is deleting all of my contacts and resetting itself to last Tuesday" I proffered in dismay as I handed the priest the iDol.

"eureka! Let's restore it," the trollish applepotamus exclaimed, as suavely as a minion of Steve Jobs could muster.

"I just did that; three times," declared your sarcastic narrator.

"okieee dokie.  let's sync it and see what happens."

"rad.  because I totally have all day with you at the shrine of Steve Jobs because I Dave Chappelled my ass out of institutionalized servitude known as employment.  Oh, rapture."

So, as I sat there, I began to soak up the ambiance of the store.  Like a sea of allusions for those *hip* enough to decode musical countercounterculture badassery, they played Clapton, the Beatles, Bob Dylan, The Rolling Stones, U2, a whole bunch of bands you wouldn't know because they aren't mainstream, and finally, The Smiths.

"What band is this?" I asked; after 45 minutes of silence.

"omg, you don't know the Smiths?  They are like the best alternative band from the 80s.  They're from England.  Well, it's not that surprising you don't know them; I mean, you ONLY have 3,939 songs.  You know, when I bought my most recent iPod, i had to let it sync with my music library for 23 hours before I could actually use it because I had 90,000 songs."

ps. you have a booger.  almost.  just there, a little to the left, no other nostril.  good job, trogdor.

So when I left the store, I purchased "Meat is Murder" by the Smiths because it actually sounded like something I'd like; after all, I've been a vegetarian for 8 years.  But it just droned the fuck on.  and on.  and on.  The band whines and bitches about school and how mean the headmaster is for *like* ever.  SO DROP OUT ALREADY.  Jesus.  and then he's like "wah, I wanna go home" and continues to complain about how he doesn't want to participate in gym class.  Get off your whiny ass and run a little bit.  motherfuck.  It's not the end of the world.  Or be a man and shoot yourself in the leg like people did to go home from Vietnam.  Grow some balls, Morrissey; or go get a job at the apple store with the other spineless androgynous beings.

The next 8 songs he's bitching and moaning about some chick he can't have with whom he is in love.  Fucking man up and get a cool car or something.  Or brag about your 90,000 songs or do some other alternative-hipsterish mating call.  or just go find another girl who isn't dating a cooler guy than you.  There are plenty of chicks, man.  Stop singing about a non-story.  Nothing is happening in your songs except it's clear you're a loser and can't get laid or run a few laps around a track.  god damn it; get a diary and leave my ears alone.

And then, right when you think the moaning will subside, there is a song that starts off real awesome like.  You can sort of imagine a mirage on an airstrip and real badasses like from a Tarantino film walking toward the camera in slow-mo.  It's called "How Soon is Now?"  And then he ruins it by opening his mouth and crying about how he's human and he needs to be loved, just like everybody else does.  and I had to practice yoga breathing to get through the rest of this horseshit.  I have to get through this.  I kept saying to myself.  Just 2 times.  I only have to listen just 2 times.  I'd rather be getting time raped from me at the apple store.

Then, finally, the big song: "Meat is Murder" comes on for the 10th and final track.  Yes, I'm thinking, a song for we veggies everywhere.  And then it's practically a joke.  Like if I were a cattle slaughterer, I'd totally play this shit while killing cows all day as a sardonic joke.  It's a parody of itself it's so bad.  It's like a bad horror movie where the audience is laughing instead of being frightened.  You know, like a Twilight movie or something when preggers Bella wakes up from her impromtu C-section and being bitten by her 400 year old husband and everyone is covered in blood and the werewolf guy is trying to get up on her infant baby.  It was sort of like that.  But you can't even laugh about it with the person next to you because everyone else loves the smiths.

I just wanted to scream at him.  If you're going to write a song about the horrors of eating meat, you need to arm yourself with some fucking ethos, pathos, and logos.  motherfuck.  Get some English class, yesterday.  First, Morrissey, establish some credibility by not being a whiny pussy who complains about gym and some girl he can't have.  Second, make us feel bad for these animals.    Describe how they cut off chicken beaks and pack them in together really tight; or how they chain small calves to poles so they can't move their whole lives.  For more information please visit: here. For "fleshed out" arguments, please click: Animal Liberation by Peter Singer.  Make me FEEL BAD FOR THE ANIMAL.  You can't do that with horrible lyrics like, "a death for no reason is murder..." blah blah blah.  CONVICTION, MORRISSEY, CONFUCKINGVICTION.  Get some.  And finally, you need to show the logic behind why a person shouldn't eat meat.  Because meat eating causes cancer, heart disease, diabetes, obesity, ugliness, sluggishness, lethal dog-farts, and erectile dysfunction etc.  If you don't believe me, go get you a netflix subscription and watch the following movies: Forks Over Knives, Food Matters, Fat Sick and Nearly Dead, The Gerson Miracle, Going Further, The Beautiful Truth, Raw for 30 days, and Food Inc. to name a few.  After you watch these movies you won't want to argue with me because you'll have a paradigm shift and be like, omfg I need to buy a juicer.  Wake the fuck up people.  Or write better songs and say more than cursory bullshit.

Man, that felt good.  Maybe I was having a shitty day.  the album wasn't all that bad.  Sorry if I offended everyone because that was probably the best band to come out of the 80s.  Glad I missed 6 years of the 80s.

Cows and apple-people approve of "Meat is Murder" by The Smiths.

What the Rolling Stone Experts are saying; although, I disagree with all of it:

Inspired by can riffs, bookended by lengthy, brutal songs about corporal punishment and the horrors of the cattle industry, the Smiths' 1985 disc is the darkest entry in the U.K. group's catalog. On "How Soon Is Now?" Morrissey sums up with great pathos and hilarity what a drag it is to be shy. More pathos would come. 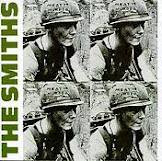