The Bends awakens feelings that are only found in the extremely rare moments of simultaneous joy and sorrow.  Like when someone makes a comment at a funeral that the deceased person would have said, knowing that had he been there, he would have appreciated and laughed at the comment at his own funeral.  Almost like from the great beyond, he channeled that thought through a living vessel to convey the small silver lining to his friends that he still remains alive in many ways.  The weirdest thing is, I can't even give you an example of this in the music, but it is there, between the raw virgin vibrations of the sound that bring you both ecstasy and depression.  A place in your head you'd like to visit, but if you stay there too long, you could be lost forever in some dream you couldn't tell anyone about because nobody would understand you or believe you.

This was one of those albums where after I had listened to a song, I wanted so badly to play it over again before moving on to the next song; and while I was listening to other songs I couldn't stop thinking about previous songs I just heard--almost to the point where I wanted to listen to them all at once to quench the thirst this album creates.  And what a thirst this album creates!  The Bends isn't great like anything The Beatles, The Stones, or Bob Dylan ever created--it's so far out in left field, i don't know how someone has the balls to categorize it.  haha "alternative" can mean a million and one things.

The Bends represented a milestone for me.  If you've ever fallen in love with something, like movies, literature, music, painting, for example, you begin to get all the little references, allusions, and inside jokes among the artists who created them; you can see between the lines, brush strokes, and vibrations to see inside the artist's mind, to his soul and see who influenced him, what he might have been feeling, who might have abused him as a child and so on and so forth.  This was the first album where I could really grasp that for this genre of art.  I could see that sometimes they sounded a little bit like U2, with a Pink Floyd undertone, but they created art so differently and taped into the kinds of emotions we don't really like to talk about.  I listened to OK Computer, already two summers ago, but I couldn't hear any of what I've just described to you.  Much of it felt like noise I couldn't place or decipher.  It was like finally being able to carry on a conversation with someone in a foreign language you've been studying.  I can't even read some early posts from this blog because I'm baffled at how ignorant I sound.  But that's what makes this project so beautiful and important to me.  The human mind has this exceptional ability to adapt.  It creates the paradox of the more you know, the more you realize you don't know, but simultaneously, your capacity to know continues to grow exponentially...

When I was a teacher, I could see into that rare student's soul.  The one who liked bands like Radiohead and while others ignored them, I got lost in an enigma of overwhelming helplessness toward them.  You just want to tell them, not everything sucks; life outside of this prison will get better.  But that might have been a lie.  They didn't have a choice to be there like I did, and in the end, I quit that job.

When I listened to "Fake Plastic Trees," I couldn't help but think of the college I graduated from.  I remember my first encounter with other students that led to a crying, frantic, phone call to my parents in a panic, "I picked the wrong school!  I'm not like these people!  Can I change it?" Just weeks before I was due to start classes.  I had never seen so many blond and orange skinned people in my life.  I had this overwhelming urge to scrape my fingernails across their faces to see how much make up I could remove.  I thought about this, not because of the amount of fake people who attend TCU, but because of the first friend I made there.  We had to play one of those highly infantile "Icebreaker" games wherein, everyone says something about herself when she is thrown a ball and then she throws the ball to another person who in return reveals some greater truth about her person and so on...

We heard things like, "I love volleyball," "I once met Brad Pitt" "I'm a Chi-O legacy" "Fashion Merchandising major!" and then it was passed to a guy who said, "Radiohead is my favorite band and I was an extra in Big Fish," who passed it to me and I had to awkwardly say the only thing I could think of, "I've never eaten a hamburger because they smell really bad to me."  He and I struck up a conversation later on, where based off of the things we talked about (mostly being the only two people in our respective high schools who read all the novels we were assigned like 1984 and Fahrenheit 451 etc), he promised me that I would really like Radiohead if I gave them a shot.  We bonded over the fact that we were not orange and we could talk about things other than bullshit.  He was totally right about Radiohead, and now that memory will be forever framed by the sounds of Fake Plastic Trees, a name which TCU should strongly consider adopting.

FPT University has a nice ring to it.

The additional crap I failed to mention about this album ( I thought I connected U2 all on my own, bastards): 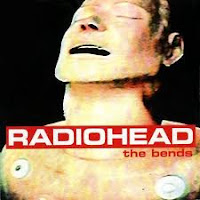 The first half of Nineties rock was shaped by Nirvana, and the second half was dominated by Radiohead. Their second album married a majestic and somber guitar sound to Thom Yorke's anguished-choirboy vocals, drawing on the epic grandeur of U2 and the melancholy of the Smiths.Read more: http://www.rollingstone.com/music/lists/500-greatest-albums-of-all-time-20120531/radiohead-the-bends-20120524#ixzz2YxmETGqf Follow us: @rollingstone on Twitter | RollingStone on Facebook