Ironically, sometimes my favorite albums are the hardest to write about.  I've been listening to Weezer this entire month and I have sat down to write about this album four times.  I think I have something interesting and then I reread it and it sounds forced and confusing.  Like I tried to say so many things that I say nothing at all.  Reader beware: This post will be some version of that.

And then I came across this article that I will come back to in a few paragraphs that made me rethink and reframe everything I thought I felt when I listened to Weezer.  It also pretty much had nothing to do with Weezer.

At first, Weezer brought back a lot of good feelings.  Overall the songs are upbeat, catchy, and whimsical, even.  I remember listening to Weezer on my drives to high school and ballet.  There seems to be a presence of Weezer throughout my teenage years, specifically the summer between my junior and senior year when I hung out with my best friend Kristi a lot and we went to the nasty beaches of corpus christi and swam in our pool.  Weezer came along for the ride.

When I first started listening to the album this month, my husband and I shared a moment in the car driving home from our favorite pizza place.  I put on "the sweater song" and he recalled a great memory from college and shared how that song made him feel.  As I glanced over at him throughout the song, his smile grew until his dimples showed and as we pulled into the driveway we were building up to the final climax and singing along and I was pretending to play the drums and the music was as loud as it could be and then as it ended and we were pulled back down from feelings and memories that neither one of us shared together, but in that moment they fused and somehow became mutual.  And I smiled at the commonality of uncommonality and he just said, "man, Weezer can deliver.  Most other bands build and then just fizzle, but Weezer really hands you a climax."

And so I kept listening to the album, trying to return to that high.  And then I read an article two days ago from New York Magazine called, "High School is a Sadistic Institution" by Jennifer Senior, who argues that through several different sociological and scientific studies of the prefrontal cortex's development in adolescents that high school is the worst idea in the history of human socialization and how in many ways, we never leave high school because it forms our identities whether we ever wanted that or not.  So basically, life is one awful Lord of the Flies cluster fuck.  and nobody can actually grow up anymore.  It's a pretty amazing article and I strongly suggest looking into it.  But there was one paragraph that caught my eye.  It was about music.  We all listen and relisten to the music we heard as adolescents--and that music becomes so intertwined with our identities that it defines the type of music we listen to for the rest of our lives.   So if you don't believe how much high school can impact your identity, check your playlists, doods.  It's because teenagers feel everything so much more than when their brains are in any other state in their lives.  So that high, those feelings music evokes, stay with you.  forever.

The article also talked about how teenagers cannot navigate the emotions and intentions of others.  I won't go into it, but she sights many studies to support this thesis.  So, I began to wonder.  This music that I loved so much--perhaps I should lay down the pointless nostalgia and listen to it as an adult.

And I was shocked at what I found.  I knew "My name is Jonas" was freaking hard on guitar hero, but I never listened to the lyrics before.  They are incredibly sad, about a child who is working all day and a child who is below the poverty line who gets bad news from his brother...

Also, I had no idea, for instance, that "say it ain't so" was about an alcoholic father and his relationship to his son.  As a teenager, I just sang along and took no notice of the meaning.  The song was badass.  Now it's just as badass, but for a deeper meaning.  It worries me how much the melodies hooked me, and I didn't even know what the song was about.

I think on a small level, I somehow felt betrayed even though I appreciate the band more for it.  I got creeped out because the song never matched the feelings it created in me.

It sort of felt like that time I watched Ren and Stimpy when I was 18 instead of 5.  And had a serious what the fuck moment. 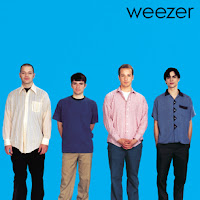 When it came out, Weezer's debut was merely a cool, quirky power-pop album with a couple of hit singles – "Buddy Holly" and "Undone (The Sweater Song)." But Rivers Cuomo's band influenced a legion of sad-sack punkers. Today, they stand just a step below Nirvana in the alt-rock canon.Read more: http://www.rollingstone.com/music/lists/500-greatest-albums-of-all-time-20120531/weezer-weezer-20120524#ixzz2J3CZI2sH Follow us: @rollingstone on Twitter | RollingStone on Facebook
Posted by Katy at 8:13 PM No comments: