Beck made me think of Jackson Pollock.

The album wasn't so much about the music, but rather, Odelay represented a musical space that proved vast imagination took place.  Much like a Jackson Pollock painting isn't so much about the end product, but the proof that a man used his imagination to create something that fit into our *updated* perception of art.  Or at least that's one justification for why people like shitty paintings.

In Beck's defense a five-year-old could not have created Odelay.

Odelay is an odd hodgepodge of music.  I couldn't tell if it was all made through a series of keyboards, turntables, or computers--but yet, it was surprisingly enjoyable.  I got the sense that these were highly motivated people searching to find something new to create, whatever the cost may be and in the process created an imaginary space that carried the listener out to uncharted waters.  There wasn't a single song that stuck out to me as the best on the album.  They are actually all quite unique from one another and yet, are produced with the same sort of gusto and inspiration.  It sounded a little like grunge, electronica, a medley of rock, punk, and indie music, all made with unconventional sounds.

Most importantly, this album made me think of how difficult it is to find one's little space in the great web of creativity and imagination.  While listening to this album, I began to process my love for writing from the beginning.  When I was about six-years-old, I remember dictating to my father, while he chicken-pecked at our DOS computer, the "great" story of a cat, a sloth, and a giant snail who were on an adventure in the rainforest.  It was imperative that my father get down every detail of how the cat and the sloth could fit inside the snail--which really wasn't an important detail to the story that lacked conflict and character development.  Not to mention themes.  Or direction.

But the turning point of all of this was when I was in the 8th grade, I got grounded for failing algebra over my two week christmas break.  I took all my anger and angst for my inability to do math well, and my frustration that I was being grounded because I was having difficulty learning something and released it on a primitive laptop I stole from my father.  I wrote a 70 page story.  I mean, it's terrible and you couldn't pay me to reread it now. But the point is, I created something.  I wrote 70 pages when I was 13.  Even though it is all crap, it was a creation.  It represents that imagination was used.  I would have killed to be able to write so much in college, but worries of "what will the professor think, what will my peers say?" inhibited my ability to create.  Perhaps, I've finally unlearned all of that to not care anymore.

(I would also like to take this time to say, I forgive you, Mrs. Alma Martinez of Gregory-Portland Junior High school for telling me, "The will is there, but the ability isn't."  I remember that, 13 years later.  It's not your fault you were as bad at teaching as I was at algebra.  I might have failed algebra, but you failed your students.  I just have to live with the fact that I can't find the value of X.  You have to live with the fact that you left deep scars in people during their most tender years.)

But anyway.  If it wasn't for that "teacher," I never would have found the motivation to write.  Even if nobody read the 70 page story I produced.  And it begged the question to me, does it matter if nobody notices a creation?  Is it enough that imagination took place?  Writing for writing's sake?  Music for Music's sake?  If nobody ever listened to Beck's Odelay, would it diminish the fact that they created something nobody had tried before, put it together and suffered painstaking thought processes for the sake of imagination?

I don't know why this album made me think of that.  Perhaps too many artists are so preoccupied with trying to "make it" or finding themselves in the world and becoming famous that they forget first and foremost, it is most important to create.  Who cares if other people read, listen, or see it?  And so, I've decided that at all costs, I will write once a week.  Just for myself.  So perhaps I will blog more from now on.

What the rolling stone peoples had to say: 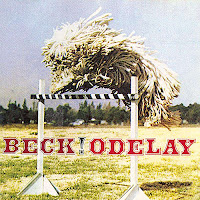 
Burrowing into the studio with sampledelic producers the Dust Brothers, Beck came back with a Technicolor version of his Woody Guthrie-meets-Grandmaster Flash vision, demonstrating to his rock peers that turntables had a brighter future than refried grunge.
Read more: http://www.rollingstone.com/music/lists/500-greatest-albums-of-all-time-20120531/beck-odelay-19691231#ixzz296PuYMuw