Starbucks saved my life on the morning of July 7, 2005 when I was eighteen, studying abroad in London.  If it wasn't for a shitty mocha or whatever it was I drank exactly eleven years ago today, I might have made it to South Kensington station that Thursday in time to be bombed in the Underground.  But no, I had to have my American materialist ritual- and thanks to the line, the whipped cream, the indecisive girl in the FCUK shirt with a nose ring who scratched her ass, bummed a fag from her boyfriend, twisted the filter back and forth between anxious fingers like a nipple while her boyfriend searched his pocket for the extra quid she needed- I didn't get to "play the part of a statistic on a government chart."

When we finally got to the South Kensington Station, armed Police were running out shoulder to shoulder and began to scream at people that there was an electrical problem and we had to keep walking.  And so we walked to the Victoria and Albert Museum.  We were having a class about the height of the British Empire, the great exhibition, the tea, the dresses, the artifacts raped from India, the revolts.

The construction was so loud that day - we never heard any of the bombs.  After taking notes in our journals and looking at tiny corsets for Victorian dresses we all went to the lobby for lunch.  A few people left but the rest of us stayed in the museum.  An employee with a megaphone got up on the desk in the lobby and begged everyone's attention.

He yelled, "BOMBS ARE GOING OFF ALL OVER LONDON.  NO ONE IS ALLOWED TO ENTER OR EXIT THE BUILDING."  I remember everything about that moment.  He was a black guy.  My stomach dropped.  My first thought was we are being held hostage.  One of the girls stole a water from the museum cafe.  She was the only one with an international cell phone plan.  She called her mom.  We all couldn't call our parents because the cell towers were overworked and we couldn't call out of the UK very well.  Busy Signal.  Busy Signal.  Busy Signal.  It was 4:00 am in New Jersey or something insane.  By the time her mom called my parents for me it was 5 or 6 am in Texas.  What if there is a bomb in the bathroom.  I have to pee.  Should I pee right now in my pants.  Am I going to die in the V&A.  I am going to die a week before Harry Potter and the Half-Blood Prince is released.  I am going to die without having read Proust or Faulkner.

But mostly we just sat in a circle.  And we talked about our all time favorite Christmas.  And if we were going to die in a group this wouldn't be that bad of a group to die with.  People of all different languages sat in circles in the lobby.  They all prayed in their own way.  Nobody charged for food at the cafe.  And we sat.  Rachel let me borrow her phone.  She snuck it to me and I went to the bathroom.  I checked behind the toilet to make sure there wasn't a bomb and I called my Dad on his office phone.  I don't remember what I said sitting on a toilet of the Victoria and Albert Museum, but I know I told him that if I die today I loved him.

Hours later we were let us out of the museum.  A policeman gave us a map on the roads we could walk on to get home.  We walked in a haze.  There was nobody on the streets.

One of the professors said, "If you have to get bombed at least you are in London.  They have a lot of experience being bombed."  We didn't think it was funny.  Not even in a Kurt Vonnegut kind of way.  Because we had to ask her to repeat what she said over all the sirens.

The sirens played all night.

I've wanted to write about this day for a long time and just never really did.  Someone else from our trip was asked to write it in some TCU magazine thing that I think you can still google; so I just never bothered.  One of the professors did too.

What I found so fascinating about the experience is everyone else who wasn't actually there while the city was being bombed seemed to know more about what was going on than I did.  All the news stations say their happy little morsels, interview grieving families, ramble off names and statistics.  Point fingers at brown people.  But as far as I am concerned, it was a ghost in the machine that did it. I never saw people with bombs.  I never heard bombs.  I never saw smoke or fire.  I didn't bleed.  If nobody told me about the bombs, I may not have known they even existed.

When I began to listen to this album, I wondered what The Police meant by the Ghost in the Machine.  Was he referring to Descartes' mind/body dualism?  Was he discussing the rise of technology in the 80s?  Referring to the soul extracted from the use of different electronic instruments needed to compose this album?  Or is the ghost in the machine something less tangible than all of that?  Was the ghost in the machine on the morning of July 7, 2005 the one who whispered, you are a white American girl, and you drink Starbucks because you have been programed that way.  It's ok, you need to be late for your lecture because you won't be allowed on the tube this morning.  You just have to buy a mocha.  Make your friends wait for you.  You do you, Katy Garrison.  Go individualize your coffee. 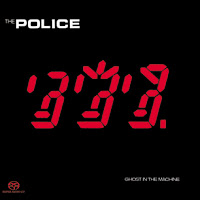 A&M, 1981
Here, the previously punkish trio added synth strings and politics, and blew up even further. "Every Little Thing She Does Is Magic" is a pop smart bomb, and "Invisible Sun," about the violence in Northern Ireland, is genuinely moving.