I've begun to think that each album is given to me at the appropriate time in my life by the grace of fate to help me understand, in a new way - if it is even possible, a meaning to this life I have been given.  What started off as a project to sort of "collect" a musical canon so that I would have a repertoire of knowledge about something I previously had almost no knowledge of, has turned into this bizarre way of life for me.  And considering I am only 56 posts in, this will be a lifetime achievement for me.  Spanning through my 30s and 40s, through deaths and births, and maybe when I am approximately 66, even if nobody actually reads this - I spent good creative energy on something that inspired me.  What might the Notorious BIG or Otis Redding mean to me when I am in my 60s vs. what they might mean when I get to them in another 17 months?  Who will I be in another decade?  My life will be measured out from album to album, for whatever that is worth.

Each month, a new album begins to blossom out to me to divulge some sort of knowledge of another time and place.  I anticipate these albums now, hoping to uncover some divine truth through this art, this energy, that was created for what seems like the culmination of only my enjoyment.  I wait and anticipate how this music is a medium for some larger purpose or knowledge spoken out through the creativity of the band and I'm overpowered by a sense that music can drastically alter a mood or force me to wallow in misery or lift me up to a height that I haven't felt in a long time if I let myself get lost in it- music takes you to feelings you didn't know could possibly exist - and I guess I knew that before this project, but I didn't really feel it the way I do now.

This month I picked All the Young Dudes by Mott the Hoople.  I had never heard of the band before, never had a clue what I was about to listen to, didn't know the genre or the era but I felt right at home and I laughed because I knew "Sweet Jane," because I love Lou Reed, and I could feel David Bowie's presence right away.  It gave me this crazy sense of connectedness - that once you know a few things, you begin to see and feel the patterns of influence across a genre of art.  And that this huge musical web isn't hard to navigate after even 56 albums under one's belt.

I usually do my very best not to look up background information on the band or the album before discussing it in this blog because I want an organic listening experience - music for music's sake.  But if I am being perfectly honest, I was having a hard time relating to the album on multiple levels even though I enjoyed the music.  In sticking with my newfound mantra that each one of these albums is here to present a truth to me, I had to wait until it was uncovered in some sort of way.  So I did a little bit of research and found out that this was the 5th studio album for this British band, and that they weren't selling many albums and were on the verge of breaking up before David Bowie stepped in and said, hang on - let me give you the song, "All the Young Dudes," which was originally meant for Ziggy Stardust and the Spiders from Mars.  It saved the band and provided them a position on this list.  The song is pretty rad and will put you in a good mood even though it's about a group of young people who don't fit in.  The song has this feeling of being torn between a lament and an anthem of that "not fitting in" experience (imo).

But the whole album has this hopeful, transitional feeling as well - and I think that has more to do with Bowie's action than it does with the lyrics.  The music is upbeat throughout - but it's this background story that reminds listeners that it's always the darkest hour right before the dawn.  That right when we feel like life is hopeless, and we should give up, someone or something can step in and influence, give hope, save, and in some way provide the encouragement needed to continue on the path.  So, thanks Bowie, the unconventional savior for helping me hear this badass album and reminding me of this truth. 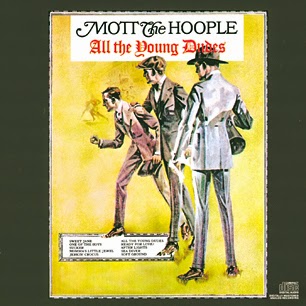 Rolling Stone had this to say:
Columbia, 1972
Mott were a hard-rock band with a Dylan fixation until David Bowie got ahold of them. He penned the androgyne title track and had them cover Lou Reed's "Sweet Jane." Mott would sound more soulful but never more sexy or glittery.