Now that I have gotten knee deep in this project, it has become more and more imperative for me to become submerged in the music to get a true grasp of what it must have felt like to listen to it when it came out.  Proper mind-set is key.

So.  I drove to a Dallas prep school and bought some heroin from a 7th grader, put on my best 1967 outfit and shot up while this album was on repeat:

Although, if truth be told, I really had no idea what the spoon was for and the closest thing I could find to a syringe was a kitchen utensil.

Embarrassed by my lack of street knowledge, I didn't want to google, "How might one 'shoot up' heroin?"  But I finally rationalized that with my college education, surely I have the brainpower to figure this out.  So after puncturing a few veins I decided this album was pretty rad.  But I guess that I just don't know.

*For those of you worried out there, Hi Mumsey, no actual heroin was purchased or used for this blog entry.*

Although, I quite imagine that if you did wish to buy heroin, a Dallas prep school would be your best bet.  However, I do hear that they only use 2% and prefer to cut the rest with Tylenol PM.  Which is hilarious.  You already have heroin.  Why do you need Tylenol?  And whoever came up with the word "cheese," has clearly never given a slang word to a drug before.  Doesn't sound de-lish to me.

Alright.  Now on to Mr. Reed and his band.  Whether or not you are on heroin, this album is one of the best I've ever heard.  There is something so mysterious, eerie and disconnected that you just can't stop listening.  Nico's voice and accent are super annoying, but once you realize that they picked her because they needed a nails-on-blackboard-cat-in-heat effect to tie all the creepiness together; you're like, holy shit, that's totally brill.  plus banana.

Now, I'm too loyal to Bob Dylan to allow myself to like Andy Warhol.  But this album was totally boss.  It starts out with this sesame street happy beat with the song, "Sunday Morning" and the song is so ambiguous that it could mean just about anything--however, the lyrics have this ominous feeling that juxtapose the beat so well.  I wonder if the song is about a hangover, or waking up after doing too much heroin and needing more but being too afraid of what it might mean to need more.  There isn't a single drug reference, but feelings of wasted time and restlessness keep you guessing.  Then you move on to, "Waiting for the Man" about buying drugs from someone who wasn't enrolled in a Dallas middle school.  But, the obvious highlight on the album was, "Heroin" which is so nihilistic and sad it left me with a happy feeling that nihilism still exists in the world beyond post-graduate stress disorder.  Some of the other songs are about S&M (woo hoo, "Venus in Furs") and even Lou Reed can't keep a straight face while singing about a "whiplash girlchild," dominating someone in the dark.  The second time he says "now plead for me" he breaks and laughs a little bit which is sort of an icebreaker because the song is so freakin weird.  Basically, the album is about sexual deviance and drugs.  So, way to represent the New York socialite scene in the 1960s.  Although, I hear the album didn't catch on immediately.  And that's totally understandable.  Peace, Love and Nihilism don't exactly go together like sushi, wasabi, and soy sauce.  Although, perhaps, heroin goes well with anything.  I wouldn't know.  So you can move your DEA truck off my street already.

Taste the whip, bitches, now plead for me: 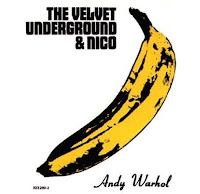 "We were trying to do a Phil Spector thing with as few instruments as possible," John Cale, the classically trained pianist and viola player of the Velvet Underground, said of this record. It was no idle boast. Much of what we take for granted in rock would not exist without this New York band or its seminal debut: the androgynous sexuality of glitter; punk's raw noir; the blackened-riff howl of grunge and noise rock; goth's imperious gloom. Recorded dirt-cheap at a studio that was literally falling apart, it is a record of fearless breadth and lyric depth. Singer-songwriter Lou Reed documented carnal desire and drug addiction, decadence and redemption, with a pop wisdom he learned as a song-factory composer for Pickwick Records. Cale introduced the power of pulse and drone (from his work with minimalist composer La Monte Young); guitarist Sterling Morrison and drummer Maureen Tucker played with tribal force; Nico, a German vocalist added to the band by manager Andy Warhol, brought an icy femininity to the heated ennui in Reed's songs. Rejected as nihilistic by the love crowd in '67, the Banana Album (so named for its Warhol-designed cover) is the most pro­phetic rock album ever made.Read more: http://www.rollingstone.com/music/lists/500-greatest-albums-of-all-time-20120531/the-velvet-underground-and-nico-the-velvet-underground-19691231#ixzz27h1IdHRt