This album evoked strange and melancholy feelings in me.  I had to force myself to listen to it, not because they bored me or anything, but because they made me feel so powerfully alone.  The album is haunting and poignant, even if many of the songs seem like upbeat, sing-a-long folk songs.  I recalled different stages in my life as I listened to this album on my drive to work and running in the evenings.

My fondness for the movie The Graduate came about when I dated a guy who looked almost exactly like Art Garfunkel. Sigh, unfortunate choice, I know.  I would put their pictures side by side, but I'd really rather not get sued.  Anywho-- When I saw the movie The Graduate, I was haunted by the music throughout the movie and had no idea that those songs (Mrs. Robinson, Scarborough Fair, and The Sound of Silence) I had heard growing up were a part of what would become one of my favorite movies of all time.  When I graduated from college myself, I, like Ben from The Graduate, suffered the worst bout of Post-Graduate-Stress-Disorder known to man.  I was the sad, directionless, liberal arts graduate.  I lived with my parents in their flaccid-dick house (lots of savvy technical equipment, awesome TVs and touch panel controls in every room for your entertainment...but none of it ever worked) and played "Paint it Black" on guitar hero for hours on end and read Proust in the evenings.  I watched The Graduate at least a hundred times that summer and hummed along in melancholy madness to the strange music I have recently revisited in this album...

I went to Florence in February one year with my fiance.  We had been in Italy for over a week at this point and had simply run out of things to say to one another.  Everyone around the world had absurdly cold winters, and Italy was no exception.  We were in a plaza outside the Uffuzi one night wondering around on the cobblestone looking at statues while it began to sprinkle freezing rain.  Understand that we had decided to do this trip alone and without English speaking guides and very touristy hotels.  We saw a lot of "off the beaten path" Italy, and because of this, had a tremendously difficult time communicating with people.  I speak some French and had a very limited understanding of Italian although I practiced the language for months before taking this trip.  I noticed a young Italian man set up a little mic and began to play his guitar.  He played many covers in different languages, but as I stared at a marble statue of some giant Roman man with ripped abdominal muscles under a streetlamp, I began to feel the hair on the back of my neck stand on end as the musician began to sing "The Sound of Silence."  It occurred to me that this was the first time I had heard my language spoken from anyone other than my fiance.  I mean, besides very limited conversations.  I felt like he was singing directly to me.  And a song so powerfully metaphorical and symbolic, it was ironic that the whole song could be taken so literal in that moment:

For example:
In restless dreams I walked alone
Narrow streets of cobblestone,
'Neath the halo of a street lamp,
I turned my collar to the cold and damp
When my eyes were stabbed by the flash of a neon light
That split the night
And touched the sound of silence.
OR because of my limited Italian:
People talking without speaking,
People hearing without listening,
People writing songs that voices never share
And no one dared
Disturb the sound of silence.
My favorite was when I heard him sing this part and I watched all these people stare at statues of gods:
And the people bowed and prayed
To the neon god they made.
And the sign flashed out its warning,
In the words that it was forming.
And the sign said, the words of the prophets are written on the subway walls
And tenement halls.
And whisper'd in the sounds of silence."


And if you've ever been to Italy, you know that nearly every wall has some sort of graffiti on it.  I can only guess they are "words of the prophets" because I don't speak Italian slang.  And the graffiti isn't like fun or pretty graffiti.  It looks just like angry phrases from a counter culture that is sick of people looking at the country's past and living in the shadow of giants... but that is my personal opinion.

And when he sang "The Sound of Silence" I laughed like a crazy person because the universe is organized chaos.  I will also remember a song that makes me feel so powerfully alone now had ironically, at one time, made me feel less homesick.

What people who actually talked about the album said: 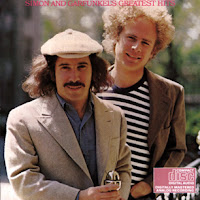 Released in the wake of a brief reunion for a George McGovern campaign benefit concert in 1972, Greatest Hits combines big Simon and Garfunkel hits and live tracks, and summarizes nearly everything great about the duo: intimate harmonizing, observant lyrics, innovative arrangements and singular tunes.
Posted by Katy at 4:07 PM