I had this revelation about a week ago, as I was sitting on the back porch watching my cat Socrates chase butterfly after butterfly.  He would pounce a little to their left and they would fly away; confirming my suspicions that he is partially blind.  I sat there, like Pip in front of his parents' graves and thought, I'm here.  I am here.  Like, my whole life, has been building up to this moment, that just as soon as I appreciated it, it had gone from me.  Like the butterfly that flew over the fence and then there was this new moment, slightly altered, slightly different from the one of neuron fires previous.  And, like a cat who lives only in the present, I knew that this is all I have.  I did not go to college in this moment.  I did not attend grade school in this moment.  I am not the freckle-faced nymph I once was, who secretly ate sticks of butter, carefully unwrapping them and savoring the decadence between small fingers, who was startled with annoyance at the discovery that I could not wash the oils from my hands so easily at the conclusion of my crime; and who started secret clubs where all the members had to have an imaginary friend who played tricks on the boys who killed lizards and toads for fun.  I am 25 right now.  but I won't be that exact age in another second.  I had had all these thoughts before, but they were marinated in this new, surprising, striking feeling of mortality.  Like, I am not promised tomorrow.  I have this moment with my large orange cat and a cup of coffee, and the feel of the grass beneath my bare feet.  But I have nothing else.  I will have other things when I go inside, when I watch paranoid forensic shows on TV while I wait for the next notable thing to happen, or I will have the feeling of the white and black keys beneath my fingers as I play a sonatina by Beethoven; but I do not have those things now.  I have a cat who found me along his winding path, and a cup of coffee.  I wondered why, with persistent annoyance that we do not train people to think like the eternally content cat.  We are taught from the smallest age, that we must wait until we grow up.  You must wait until Christmas to get the Xbox.  You will have your free time in the summer.  You can drive when you are 16, you can vote when you are 18, when you are out of college, you can do whatever you'd like.  It felt like all this incessant and pointless waiting led up to this moment.  That I am here.  Finally, after so long of waiting.  And nobody could have told me that the future held a cat and a cup of coffee.  And a Beach Boys album that may have helped to spark many of these thoughts.  What on earth was the point of waiting?  Why do we program people to look towards the future when it has not yet arrived; and it might not- for you may be the unfortunate boy whose remains are found in a sewer, like in the last forensic show.  Or you may have been one of those people who used to talk of nothing but the future, how you will become a doctor, how you will marry a beautiful woman, how you will make lots of money, and now you nurse dark bottles of beer after a tiring job, standing in intimate circles in the back corner of a bar and talk about nothing but the past, when it is no more.

When I first listened to Pet Sounds, by the Beach Boys, I was a little disappointed.  At first, it seemed very poppy, and I wondered with annoyance how they could have made their way to the second slot on the list.  I thought I would say things like, which beach boy turned trick to get them up that high on the list?  But I really don't know anything about why this album was so important.  I wasn't there in May of 1966 when the album came out.  I imagined young girls in high school buying the album at a record shop.  and I wondered where all those women were today.  Did they have grown children?  Did they remember the smell of the record, the crackling, popping noise it might make as they delicately placed the needle on the first track?  When they hear "God Only Knows" on the radio, do they imagine a past lover, a boy who, like the woman in question, shared the same sympathy with the lead vocalist?  Did they identify with music that supposedly shaped Rock and Roll history (for reasons unbeknown to me)?

When "don't talk, put your head on my shoulder" came on, I recalled a Paul McCartney concert a few years ago when he sang, "She was just 17, if you know what I mean..." and my insides almost curled up and died.  He looked like a gaunt, deathly ill ghost impersonating a man who once was.  An elderly shadow clinging to a moment that came and went.  And I wondered where the Beach Boys were now; what were they doing?  What time made them become.  Do they sit around and talk about the past, or do they have different lives now with new interests and new pleasures?  Did they have a moment with some butterflies, a cup of coffee, and a cat?

In this light, the songs seemed less pointless and poppy to me.  They seemed a little deeper than expected.  Suddenly lyrics like:
Wouldn't it be nice if we were older
then we wouldn't have to wait so long
and wouldn't it be nice to live together
in the kind of world where we belong?

Seemed like a group of people in a quarterlifecrisis reaching out for a future they were promised by parents who unknowingly programmed them.  I could feel people, perhaps a whole generation of people, itching to burst out of their skin, but feeling unable to do so.  The song that really stood out to me on this album, one that was not poppy and happy, one that seemed introspective and sad was "I just wasn't made for these times":

I guess I just wasn't made for these times"

I could feel the angst and the annoyance.  The constant searching for a destiny that never really existed, but was always promised by people who don't have to live your life.  How many others of his generation felt this feeling.  God, how many people of my generation feel this?

In sum, the album's placement on the list at first glance seems like something to be written off as a fluke.  It could easily be dismissed that "oh, it only made it so far up the list because it was pop music."  Perhaps that helped it get placed, but there is much more to this album beneath the surface.  The thoughts that it provoked in me made me rethink dismissing it.  I wonder if I heard it years from now if it would have produced similar thoughts, or a whole chain of different ones.  Maybe 'twas the culmination of being the same age as the band members, in a generation that so desperately wants change and yet feels so impotent to break away helped to formulate this "review" if you can even call it that.

So thanks 24-year-old Brian Wilson.  Did you know that one day, on my own path, yours would cross mine on an iPod and I would spend a Sunday afternoon with a cat named Socrates sharing a private eternity of thoughts that will soon be forgotten, like everything else?  Until I am blindsided by a Proustian Madeleine years from now and a song of yours from this album will come on, and I might tell children of my own how had I not written a blog in my confused 20s, I never would have stopped to appreciate a neurological path accidently forged by a musician before me, who never knew my name, nor has never and will never meet me.  And they might laugh, or think I'm strange, and I, in turn, might laugh at them when I go to make brownies and all the butter is missing.

You make me and baby Jesus happy to hear your music.

What people who actually know how to write reviews said: 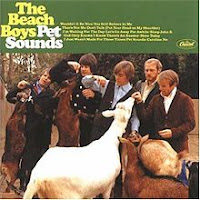 "Who's gonna hear this shit?" Beach Boys singer Mike Love asked the band's resident genius, Brian Wilson, in 1966, as Wilson played him the new songs he was working on. "The ears of a dog?" Confronted with his bandmate's contempt, Wilson made lemonade of lemons. "Ironically," he observed, "Mike's barb inspired the album's title."
Barking dogs — Wilson's dog Banana among them, in fact — are prominent among the found sounds on the album. The Beatles made a point of echoing them on Sgt. Pepper's Lonely Hearts Club Band — an acknowledgment that Pet Sounds was the inspiration for the Beatles' masterpiece. That gesture actually completed a circle of influence: Wilson initially conceived of Pet Sounds as an effort to top the Beatles' Rubber Soul.
Wilson essentially made Sounds without the rest of the band, using them only to flesh out the vocal arrangements. He even considered putting the album out as a solo project, and the first single, "Caroline, No," was released under his own name. The deeply personal nature of the songs, which Wilson co-wrote primarily with lyricist Tony Asher, further distinguished the album from the Beach Boys' typical fare. Its luxurious sound convey a heartbreaking wistfulness, as songs such as "I Just Wasn't Made for These Times" and "I'm Waiting for the Day" bid farewell to the innocent world of the early Sixties and to the Beach Boys' fun-in-the-sun hits.
Unfortunately, Capitol Records proved no more enamored of Pet Sounds than had Love; the label actually considered not releasing the album at all. Not yet vindicated by history, Wilson withdrew further into his inner world. "At the last meeting I attended concerning Pet Sounds," Wilson wrote in his autobiography (which took the name of the album's opening track, "Wouldn't It Be Nice") about his dealings with Capitol's executive brain trust, "I showed up holding a tape player and eight prerecorded, looped responses, including 'No comment,' 'Can you repeat that?' 'No' and 'Yes.' Refusing to utter a word, I played the various tapes when appropriate."
Read more: http://www.rollingstone.com/music/lists/500-greatest-albums-of-all-time-19691231/pet-sounds-the-beach-boys-19691231#ixzz1s8lvL2iN
Posted by Katy at 1:03 PM 3 comments: