Recently, I have been completely obsessed with Jay-Z's soundtrack to The Great Gatsby, which I think was brilliantly assembled, constructed, as poignant, eerie, and melancholy as the movie, and full of color and life in its limitless imagination.  Getting Jack White to cover "Love is Blindness" was the icing on the cake.

So, I decided to try Jay-Z's album "Blueprint" out for size.

I don't know what I was expecting, but this whole album felt like one big self-serving ego stroke.  I've never heard such blatant narcissism before and wondered how anyone could perceive this album as anything other than a giant stroke-off session.  But, most rap is like that, right?

If we could translate portions of his album into Icanhascheezburger language, its synopsis would be something like this:

1. thx 4 buying my albem, becuz it is da only 1 in existence. Next time buy 2 of them. kthxby
2. I gets all the females all over the world.  none 4 you, muhahaha.
3. I is the 8th wonder of the world.
4. I have piles of moneyz taller than you.
5. all other rappers suck. cept Eminem and someone named ROC

But, if I'm being completely honest here, I couldn't get some of the songs out of my head and while playing it to and from work it made me somehow feel important--like I too, was on a vast ego kick.  To his credit, he doesn't talk about murdering bitches or really hurting anyone.  So what do I care if he wants to talk about how great he is and how much everyone else sucks?

My husband warned me before I began to write this blog.  He said, make fun of all the whiny white retards from the 80s all you want, but don't fuck with Jay-Z because he's liable to show up here and make you disappear.  And you know what, the funny thing is--I totally believe that.  Because whether I want to contribute to his ego or not, there is something so mysterious about Jay-Z, so mythological, that you think-- this is a guy who can make anything happen because he sees through the threads of the system and in his own way--he's a bit like Gatsby, no?  (well, someone did fuck with Gatsby, but whatever)  The man has more money than God, he freaking married Beyonce, was able to buy a barbie doll with a dress made out of REAL diamonds for his one-year-old, self-made billionaire, rags to riches all the way...

And, although there were many rumors about Gatsby, you can't deny all of the strange mason, secret-society shit Jay-Z has locked up in his albums.  Even NPR did an "all things considered" about his eerie occult symbolism that you can read or listen to RIGHT HERE.

All in all, the album was fun to listen to although I tired of hearing about how great he thinks he is.  At least Gatsby was somewhat humble.  Humility goes a long way, methinks.

What Rolling Stone had to say: 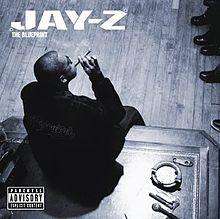 If Frank Sinatra had been born a Brooklyn rapper, The Blueprint is the album he would have made. It's all flash and bravado, with Jay-Z dissing rivals, talking smack about his troubles with the cops and flossing hard with ladies all around the world.Read more: http://www.rollingstone.com/music/lists/500-greatest-albums-of-all-time-20120531/jay-z-the-blueprint-20120524#ixzz2VjotIZNP Follow us: @rollingstone on Twitter | RollingStone on Facebook