Some days the lava lamp on my desk represents the expansion and contraction of the universe, the beginnings of single-celled life, raw fresh earth spewing out of the unknown depths beneath us, the ebb and flow of the ocean, the life force flowing through our lungs -- and other days it's just a blob of hot wax moving through water in an upside-down glass vase.

Both avenues of thought are true and co-exist in reality in the same way you and I are abundant miracles of endless consciousness, electric current, sacred vessels capable of heroic journeys, boundless love and the like.  But we are also blobs of wax, bobbing around pointlessly and bumping into other blobs of wax.  All for the amusement of an unknown creature some would venture to call God.  Or maybe not.

I stared at my lava lamp while Elton John sang "Goodbye Yellow Brick Road" (which was easily my favorite song on the whole album) and wondered what if each gene in our bodies represented a note on the piano- what would our individual songs sound like?  Then I wondered if this in any way influences people to write the kinds of music they do, and what makes them so original.  Maybe the sounds come from within the language of our genes.  I couldn't imagine Green Day or Elvis inventing Elton John songs, or vice versa.  There are only so many notes on the spectrum of sound that humans can hear, and yet endless combinations of songs.  Only so many genes, and yet endless combinations of humans.  All crafted with the same material, more or less, but brilliant in their own regard.

I cleaned out my closet this weekend and with a pang in my heart I uncovered a trash bag full of dead point shoes, tights, leotards, and a worn pair of ballet shoes.  My first inclination was to just put it back where it was in the depths of my closet, hidden out of sight.  But as Elton sang, I began to rummage and dump them all out on the floor.  Ribbons askew, old elastic stretched out and mealy.  It had already been a full decade since I wore any of these things.  I was a 17 year old person staring back at my face in the mirror and wondering who I was and why I was here at a different capacity for comprehending that question the last time I wore this stuff.

I found the hardest pair of shoes and put them on.  I didn't have gel pads, so I just put them on my feet without padding inside so I could feel the floor even more.  I wrapped the ribbons about my ankles unconsciously, like I had done it yesterday.  Then I said fuck it, and put on my favorite violet leotard and tights.  As Elton John blared through my ipod, I danced around in my bathroom-closet area, absorbing leather and satin and glue.  The smell of my teenage self through the fabric artifacts that could likely survive me.

I made body art in my bathroom and then it was washed away.  Like when I roll up my yoga mat or throw away a doodle, or stop playing the piano, turn off my lava lamp at the end of the work day, when buddhist monks wipe away a mandala, or when a person exhales for the last time.  It was gone as soon as it had come, this moment in time when I danced for nobody but myself to Elton John in a bathroom.

When I took them off, I remembered little things about that pair of shoes.  I had burned the ribbons with a blue lighter I borrowed from a friend while they were on my feet and realized for the first time how stupid that was as I shook my foot violently to put out the fire.  I also remember the argument with my mother that, yes, I was going to sew them with green dental floss because that worked better than thread.  Who cared if it matched?

The weirdest part about the experience was afterwards, I stared in my bathroom mirror at the moment Elton sang "Look in the mirror and stare at myself and wonder if that's really me on the shelf."

Would my DNA song be an Elton John song?  Probably not, I think I jive more with David Bowie or Lou Reed- but he held a moment for me worth writing about, already worth thinking back on, locked up in the same closet area I discovered the shoes that unlocked a buried lifetime.

Maybe that pair of shoes is just fabric, glue, and leather.  Or maybe something a little bit more. 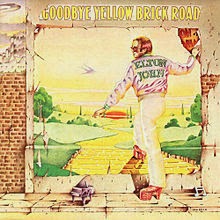 Elton John compared this double album to the Beatles' White Album, and why not? By this point he was the most consistent hitmaker since the Fab Four, and soon enough he would be recording with John Lennon. Everything about Goodbye Yellow Brick Road is supersonically huge, from the Wagnerian-operalike combo of "Funeral for a Friend" and "Love Lies Bleeding" to the electric boots and mohair suit of "Bennie and the Jets." "Saturday Night's Alright for Fighting" is strutting rock & roll, "Candle in the Wind" pays tribute to Marilyn Monroe, and the title track harnesses the fantastic imagery of glam to a Gershwin-sweet melody.Read more: http://www.rollingstone.com/music/lists/500-greatest-albums-of-all-time-20120531/elton-john-goodbye-yellow-brick-road-20120524#ixzz2yM2eHC36 Follow us: @rollingstone on Twitter | RollingStone on Facebook
Posted by Katy at 8:02 PM No comments: