I woke up last September with a leash wrapped around my wrist standing in the middle of the street around midnight with this album on repeat shrieking through my veins.  I hate running; I hate it almost as much as airport security or when pimply teenagers try to hit on me at Jimmy Johns and I realize, with a jolt of left over high school insecurity, that I am old enough that they might just be making fun of me instead.

It was kind of like that, but there I was around midnight with a panting pomeranian and the two of us had just been running because I was drunk or something and creatively blocked and my grandfather had died and I was remembering earlier that summer when this calf died out in the field for my job. Rightfully, they don't allow firearms on location, and to put him out of his misery, the boss from our office was called to the sight to slit his throat open right there with a pocket knife.  Some idiot, probably texting, had hit the little thing with a work truck.  And they all stood around it and watched it suffer like cowards.  When the phone call came, he left the office went out there.  All the men just stood there, nobody admitting to driving a car.  Someone said, he is sick.  We found him like this, he's just sick, we didn't do nuthin.  When he came back, I could see it in his eyes.  That horrid act of God glistening like a drunken film after a night of beer.  A glassy spirit evaporating off the whites and into the sky.

I thought about how the Victorians took pictures of Jack the Ripper's victims because they believed a photograph would show them a mirror reflection of who the killer was because photography was so new.  But they had it wrong.  It's in the other guy's eyes.

Weeks later someone brought a garden cantaloupe to the field office and he pulled out his pocket knife to cut it open.  It was so juicy it wept at the cut mark and someone told him he better wash that knife and he said, this knife has only been in good places.  Maybe that was true.

But I'm not that person anymore.  I'm not a vegetarian anymore.  And cows fucking die, either at the hands of heroes or at the hands of idiots.  I sat on the curb with my dog and thought back to that incident, while "All Apologies" was playing.  I was astounded that I was free of the emotional torture I used to feel when animals died.  When I saw a picture of an animal dying, or a hunter's murdered beast, I could physically feel the animal's pain.  It would make me ill with overwhelming anger.  This fear and terror was based somewhere deeper than empathy.  It was based in my absolute fear of death and being alone.

Maybe the culmination of the amount of shock and symbolic death I have gone through in the last two years, the marriage I suicided, closing the door on the life I had created and built, the dreams that turned to nightmares before my eyes left me with empty pockets carrying no more fucks to give for a cow.

If Kurt went out with a bang, what did that mean?  Maybe the point, which seems like such an obvious one now after so many months - is that we all die; we have all died before; and we will all die again.

So rather than be afraid of death - maybe the point of life is to make death afraid of you. As I walked gently, into that good night, with "About a Girl" beginning again, I thought: do not rage, rage, against the dying of the light.  Make that fucking light rage violently against you.

What Rolling Stone Mag had to say about this album: 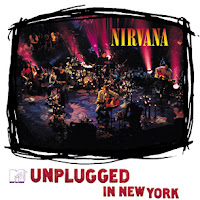