I love Michael Jackson's Thriller album the way I love Lisa Frank artwork and this cat shirt: in absolute secret even further buried behind gay west texas baptist boys under piles of dirty rainbow bright clothing in the back-most corner of the universal closet.

So I guess I'll go ahead and come out now to confess that Michael Jackson is sort of amazing.  If I hadn't grown up always knowing who he was, I would not have guessed, based on its voice, that the singer was male.  And I might not have guessed that he was black either, the opposite problem Van Morrison has.  And if you don't believe me about Van Morrison, one of the ways people find my blog is by googling "Is Van Morrison a black man?"  But all those jokes about MJ have been belabored to death. (for those of you who just googled 'Is Van Morrison a black man and were brought to my page the answer is no.  He's Scottish-ish, but born in Belfast, Ireland and shares Harry Potter's birthday- not that any of those things could make him un-black.)

I'm not interested in discussing whether or not Michael Jackson was killed by illuminati, obviously he was.  Nor do I want to discuss the accusations that he diddled children.  I doubt he did such a thing.  People hate minds they don't understand, and MJ's was a bit hard to comprehend.  Believe me, I am empathetic to children who have been molested, but it usually comes from sources people don't suspect (priests, everyone's favorite uncle, etc.) and sorry MJ, everyone suspected you because you went cray-cray the way Britney Spears and the recent Miley Cyrus alien did too; only you were a man, despite evidence to the contrary.

So, now that those unpleasantries are behind us, let's discuss the music in my own meandering way:  Once I asked the husband what the shampoo bottles do when we are not using them.  He responded that the whole purpose of said shampoo bottles was that it meet my needs as a tool and it was created specifically for my use and perhaps they don't actually exist when we are not using them.  Good answer, because I am a leo and everything revolves around me.  Then I added, "Just like Michael Jackson."  And explained that Michael Jackson might not exist if we've never met him.  To which the husband responded, "Every time me and MJ tried to get together he was always busy doing his thing and I was always busy doing mine."  I began to laugh my maniacal laugh and said, "Michael gets it.  You know, he's one of the only people who actually beat the system.  Everyone is laughing at him, but really he's laughing at everyone else.  He got to sing and dance and have a chimp and live in a theme park and doesn't have to answer to anyone.  And being a child forever would be amazing.  Totally above the sheeple."  And that thought made me wonder if we are the crazy ones, living totally normal lives trying to make ourselves feel better by making fun of celebrates. *Miley Cyrus, aside - she nasty.*

Anywho- Obviously the best songs on this album are Thriller, Beat it, and Billie Jean.  It wasn't until recently that the lyrics to Billie Jean were cleared up to me.  I used to think he was wailing, "But Lu Chan is not my son." and thought he just had a thing for Blasian women like everyone else.

As a part of this Michael Jackson week, I also watched countless youtube videos to learn how to dance Thriller.  Which I am proud to say I know the dance, but nobody can move like Michael and so I will not provide the video of my experiences here.

What Rolling Stone Mag had to say about Michael Jackson's Thriller Album: 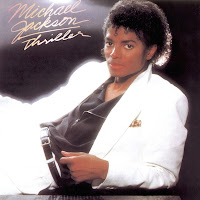 Epic, 1982
Michael Jackson towered over the 1980s the way Elvis Presley dominated the 1950s, and here's why. On Thriller, the child R&B star ripened into a Technicolor soulman: a singer, dancer and songwriter with incomparable crossover instincts. He and producer Quincy Jones established the something-for-everyone template with 1979's Off the Wall, a crisp fusion of pop hooks and dance beats. On Thriller, the pair heighten the sheen ("The Girl Is Mine"), pump up the theater ("Thriller") and deepen the funk. But the most thrilling thing was the autobiography busting through the gloss: the hiss of denial on "Billie Jean"; the to-hell-with-haters strut of "Wanna Be Startin' Somethin'." Jackson was at the peak of his art and adulthood.
Read more: http://www.rollingstone.com/music/lists/500-greatest-albums-of-all-time-20120531/michael-jackson-thriller-20120524#ixzz2et8eOsjv Follow us: @rollingstone on Twitter | RollingStone on Facebook