What the fuck did I just listen to and why was it so awesome?

This album was easily one of the greatest musical accomplishments, ever.  Without hyperbole or sarcasm, Ziggy Stardust has it all: Great tunes, aliens, mentions of spiders, just someone named Ziggy gets like 250 points, and the imagery of a cat from Japan.  Kick. Ass.

I have spent the last two weeks totally married to this album.  We drove to Dallas together, drove to work together, whilst jogging to "Rock 'n' Roll Suicide," I stopped in the middle of the trail and vehemently exhaled, "Oh No, Love! You're not alone!" to the amusement of our village idiot, a Boo Radley of sorts who vagabonds around the park all day in the same clothing, staring at clumps of dirt or the sky for hours at a time...

Ahem.  I know how.  So, if I could ask David Bowie one question, it would be, "If you could go back in time and have sex with ANYONE, who would you pick?"

Many chew on the question, taking it rather seriously and try to come up with something clever like, "I'd be Teddy Roosevelt's Rough Rider" or "Watch out Audrey Hepburn, Holly doesn't come lightly" or what have you.

But Bowie would probably answer this question with the same force and vigor of a God answering the question of the meaning of life to a mere mortal.  He would stoically respond, "Why, I would of course fuck myself, my child."

While listening to this album, I was told by several people, "well, you know he and Mick Jagger had a thing, right?"  So, after careful pondering, I came to the conclusion that the closest thing our dear solipsist, David Bowie, could get to copulating with himself was to have sex with the only person on the planet cooler than him, gender be damned.  It probably wasn't even sex.  It was probably a way to call the rest of their alien brethren to earth for a jam session.

I was all on a cloud about this album until I watched the movie of the 1973 concert.  And it was like someone ripped the beating heart right out of my chest and ate it while I tried to scream.  As I watched a 90 pound creature prance around the stage in wallpaper, it occurred to me that the spread of the AIDS virus was not because of government experiments on monkeys in Africa, nor was it God's punishment to the gay community, but it was caused directly because of the Ziggy Stardust tour.  Every time Bowie flipped up his kimono, it was not for rapturous applause, but it was to secrete microscopic spore-puffs from his ballsack, thus gassing the virus out onto an enthralled community of coked-up unsuspecting teens.

Anyheum-- what the spiders from Mars have to say: 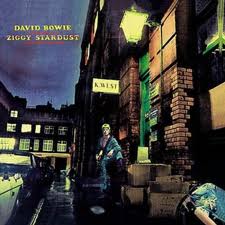 This album documents one of the most elaborate self-mythologizing schemes in rock, as David Bowie created the glittery, messianic alter ego Ziggy Stardust ("well-hung and snow-white tan"). The glam rock Bowie made with guitarist Mick Ronson on tracks like "Hang on to Yourself" and "Suffragette City" is an irresistible blend of sexy, campy pop and blues power. The anthem "Ziggy Stardust" is one of rock's earliest, and best, power ballads. "I consider myself responsible for a whole new school of pretensions," Bowie said at the time. "They know who they are. Don't you, Elton? Just kidding. No, I'm not."Read more: http://www.rollingstone.com/music/lists/500-greatest-albums-of-all-time-20120531/david-bowie-the-rise-and-fall-of-ziggy-stardust-and-the-spiders-from-mars-20120524#ixzz2LPfGwZ7M Follow us: @rollingstone on Twitter | RollingStone on Facebook
Posted by Katy at 9:15 PM 2 comments:

Jack White reminds me of that creepy Tim Burton creation from A Nightmare before Christmas.  I was expecting manic songs declaring "this is halloween" around every turn; but instead, well actually, that was pretty much what I got.

Only kidding.  The album declares that it is a concept album of sorts.  I read so in the little booklet that came with my one cent cd that I ordered off of amazon.  It deals with "the death of the sweetheart."  So, you know when it's like 2 am and drunk o'clock and your lazy ass was SUPPOSED to make the long rambling paper tie into all the things you learned in class?  And give it important attributes like a thesis statement and some themes for good measure, but you didn't?  So you "muhahahaha-ed" to your clever little self and you erase your shitty turd of an introduction and then you rewrite it with this sentence: "THIS PAPER IS ABOUT ____________." even though it isn't?  That happened in this album.  But, that doesn't take away from its awesomeness.  It just felt like they had a lot of after thoughts and tried to make those work.

I was very confused, because when I heard the song about a man talking to himself in his mind behind a cigarette, I was like, "is he going to kill his sweetheart?  why is she breaking up with him?" oh, right, because he looks like he stick-walked himself off a Tim Burton storyboard, I remember.

But none of this prattle is important.  Everyone knows that with music it's not so much about the lyrics but the feelings it creates.  So you can be like homeboy and just use the pronoun "it" over and over as a subject and elementary rhyming, but blow everyone away with your killer music.  The truth is, they are a very talented group.  None of the songs remotely resembled the previous one and I was very impressed how they drew from jazz, older genres of music, and even folk music.  The only song that I didn't really care for was the last one where they sang back and forth at one another and tried their best at humor with singing.  The banter was annoying and sounded like junior high flirting.  Their lyrics still beat the hell out of Mark Knopfler's though.  hands down.

Seven Nation Army, for whatever reason, reminded me of the time I was stuck in the Victoria and Albert museum during the London Bombings of 2005.  It was July 7th and it was a Thursday morning.  I didn't hear a whole lot throughout the album that resembled their purported theme, but I felt the terror of losing one's safety net; and that's what this album made me feel all over again.  Although neither Jack White, nor I, have enough evidence to write a convincing argument that the song, "Seven Nation Army" argues for either the death of the American sweetheart, or the sick feeling that burgeons up as you leave what might be your last phone message on your father's office phone saying, as calmly as you can, "I think we are being held hostage.  Bombs are going off all over London.  I don't know how many more will go off or if they have one in the museum.  I know it's too early for you to be at work yet, but I had to call anyway.  If I don't make it home, I love you Dad."  Neither theme really works and I would fail both of us heartlessly if I were still a slave behind a podium with a red pen.  But everyone with a brain cell knows grades are a crock of shit, so let there be terrible themes and wonderful music, and anxious stories that are dropped at the end of a blog entry like a bomb and don't have a conclusion...

What those who don't get paid to ramble had to say about Jack and Meg White:


Jack and Meg White proved their minimalist garage rock had more depth and power than anyone expected. On tracks like the slow-burning "Seven Nation Army" and "The Hardest Button to Button," Jack's songwriting finally matches his blues-fanboy, art-school shtick.Read more: http://www.rollingstone.com/music/lists/500-greatest-albums-of-all-time-20120531/the-white-stripes-elephant-20120525#ixzz2KHKZKD57 Follow us: @rollingstone on Twitter | RollingStone on Facebook
Posted by Katy at 8:29 PM No comments: