You know you're unemployed and a potential drain on society when you've realized that for the last two hours, you've been watching a family of ducks while listening to the Sticky Fingers album by the Rolling Stones.

I felt like Tony Soprano this week because I found myself sitting by a pond near my house obsessing over a family of ducks that recently decided to make it their home.  For those of you who didn't know; I have a secret *not anymore* obsession with birds.  Not that I've ever tried before, but I finally found a reason to relate to Mark Bittner, in one of my favorite all time documentaries: The Wild Parrots of Telegraph Hill.  It's about a homeless dude who befriends a flock of parrots.  But he can get away with this shit because he lives in san francisco, not in shit kicker county, texas.

Because I spent the last 60 hours of my life watching HBO's classic Shakespeareanesque series The Wire, I began to name the birds after the characters.  The one who was all alone and quacking at the others received the name of Omar; the one who kept trying to mate with all the females was McNulty; the douchey one who kept pissing the others off was Prezbo etc etc.

There is no segway, not even a bad one into the music section of this particular post-- oh wait, I lied.  I do have one today:

In one of the earlier episodes of The Wire, Prezbo explains to all the cops a line in "Brown Sugar," the opening song to the Sticky Fingers album.  It's a line that, as Prez puts it, we've all heard before but never listened to.  It ultimately sheds insight into listening to wire taps over and over to crack a case about trafficking foreign women into the United States for sex--but back to MY story with Ducks and Stones, I named one little duck Prezbo and listened to Brown Sugar over and over and rather than hearing slurred speech and something like: "Go-Mo haze, you know the kind in tears, sold in the market down in New Orleans--"  I finally heard it like Prezbo: "Gold coast slave ship bound for cotton fields, sold in the market down in New Rrleans" and I began to repeat the song over and over and was suddenly grossed out by the audacity of their lyrics.  They really are singing about young black women being raped in a sex trade!

It dawned on me that the whole album mirrors these moments.  The music is beyond fantastic.  It gets you high because the beats throw you into the kind of mood where you feel like you're pumped and ready to take on the duck pond--but then, after repetition, you begin to comprehend the gravity of the lyrics which juxtapose the music forcefully.  My settled favorite song on this album is Dead Flowers.  It flopped from Bitch to Brown Sugar, to Moonlight Mile and ended up on Dead Flowers.  The music is mellow, yet happy somehow-- but there is a jarring line where Jagger says, "I'll be in my basement room with a needle and a spoon" and I was just like "yikes, man, lighten up.  What do you think this is, an episode of The Wire?"

I was a bit put off by his phony Texas twang; it made me feel a little insulted, because a REAL Texan would know that we ain't got no basements in this here state.  Y'all gotta go up north fer that.  damn brits.

Overall the album was priceless.  A true gem and one of my favorites so far.  I wish that bands today could rock out and tell it like it is like the Stones.

Even Ducks approve of the Rolling Stones.

I'd like to give kudos to this blog that helped clarify how the "Brown Sugar" convo went down in the police room in the Wire: The Codebreakers

and omfg, this album cover is still vulgar after 41 years.

What the Rolling Stone Magazine had to say about this album: 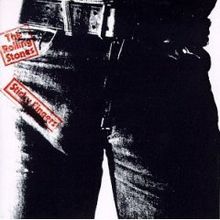 Drummer Charlie Watts remembered the origin of Sticky Fingers as being Mick Jagger and the songs he wrote while filming a movie in Australia. "Mick started playing the guitar a lot," Watts said. "He plays very strange rhythm guitar . . . very much how Brazilian guitarists play, on the upbeat. It is very much like the guitar on a James Brown track — for a drummer it's great to play with." The album has tough, straight-up rock, such as "Brown Sugar" and "Bitch," but also finds the Stones expanding their sound with strings on the lovely "Moonlight Mile." Two of the best cuts are the two country songs: one forlorn ("Wild Horses") and one funny ("Dead Flowers").Read more: http://www.rollingstone.com/music/lists/500-greatest-albums-of-all-time-19691231/sticky-fingers-the-rolling-stones-19691231#ixzz1nA77sl4q
Posted by Katy at 4:48 PM No comments: