I knew nothing about this album when I started listening to it.  I wasn't even clear on the sex of the artist until about half way through the first listen because she has a deep voice and an epic monotone.  If I could get those hours back of my life from listening to this album that would be awesome.  If there is a market somewhere for memory loss, please find me that number.
This album is nothing but Super angry fem-nazi confessionalist bullshit.  It is also, somehow, supposed to be a response to The Rolling Stone's Exile on Mainstreet.  Although I haven't heard that album from beginning to end yet, (and I am regretting my decision to listen to this crap over another Rolling Stone's album) I know of some of the songs on that album, and homegirl, I'm not buying it.
I was offended by the misandristic (correct man-hating term?  We don't really use one) tones and the way she described encounters with men.  If the gender roles were reversed honey, we have a name for the things you describe in your lyrics and it's called RAPE (well, it should still be called that, regardless of a gender reversal scenario but it puts it into perspective for those women who are still battling insecurities about not being "equal" for some reason.)  Can I also add that the number one rape victims who never come forward are men?  nuff said.  We all suffer now.  Men moreso than women now thanks to your backlash and others like it.
Example in the song "Flower":
"I want to f*ck you like a dog
I'll take you home and make you like it"
Creeper.  If you were a 40-year-old-man and you said that to anyone you would be a creeper.  This is not ok.  Because you have a vagina you think you can say these kinds of things and make it on the Rolling Stone's top 500 album list for being "honest" and "interesting?"
This album just made me angry.  I know it came out in 1993 and what not, but fem-nazis, put down your ball cutting devises, we have reached a synthesis.  The more you alienate yourselves by making music with lyrics like:
"Because I take full advantage of every man I meet
I get away almost every day
With what the girls call, what the girls call
What the girls call, the girls call murder"
the more it is obvious that you are insecure and bitter.  Awesome, I hate you.  And good luck getting laid after writing that.  and thanks for making feminists (who should really now be called humanists because let's stop dividing genders already, everyone suffers) look awful.  I'm sure you never got to take advantage of a guy because he saw the teeth in your vagina and cut out faster than you could lie about having sex with him. elle oh elle smiley face.
What Rolling Stone's Mag had to say about this album- it looks heavily edited and lacking all the things they wanted to say that I went ahead and said for them: 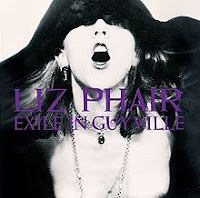 A studio expansion of Phair's homemade Girlysound cassettes, Exile's frank sex talk caused a stir. But it's the lacerating honesty of tracks such as "Divorce Song" that sticks, and "Fuck and Run" is one of the saddest songs ever written about dreaming of romance and settling for less.
Posted by Katy at 6:45 PM