So I was at this gelato place the other day and this little pixie-waif girl was yes-manning the shit out of this hipster type in a lumberjack plaid button up.  He was ranting on and on about how his unapologetic friend "was all like this and that" concerning said friend's newest idea on how to spend his trust fund moneyz.  The girl was sucking on the tiny spoon and saying, "omg, that is ridic.  so ridic.  If I had that kind of money, I would do something better with it, like go skiing in Colorado.  It's skiing season, you know."

I was keenly tuned into this opportunity to be the anthropologist in my mind and my fiance and I were shaking our heads, both wondering the same thing, which is of course is-- when the zombie apocalypse happens, clearly we won't be the first to go.
And then the male specimen turned the the female and said, "and all that shit between me and him went down about the time the Drake album came out."  and that's when Dulce de Leche came out of my nose.  I asked my fiance later, "Who the fuck measures time by when the Drake album came out? and P.S., didn't he mean crippled Jimmy from Degrassi?
But anyway, I began to wonder which albums I measured time by.  I really could only think of Enima of the State by Blink182 when I was in the 8th grade.  I was fortunate enough to find a way to tie in that anecdote with No Doubt's Rock Steady album by saying that it came out when I was in the 9th grade.  I remembered people being excited about the new album and the radio overplaying it, but I wasn't a big No Doubt fan myself.  I thought she was kind of annoying.

This time around, I listened to this album longer than usual.  I chewed on it, and sat on it, and wondered what I was going to write about.  I didn't get attached to any of the songs, nor did I care so much about the music.  I found it to be mostly an upbeat album and like one of those wine blends that sounds horrible but by the time you're drinking it, you're too drunk to care.  It was mostly like that.  It's EXCELLENT dance music, a little R&B, hip hop, lots and lots of Jamaican beats (which I found out is why she titled the album "Rock Steady") and overall just a good album from the 1st to the last song.  It didn't move me, it wasn't memorable, it wasn't super special, it was just nice background music.  Not my style.  But if you want to dance like nobody's watching; it would be a good purchase.

What the RS Mag has to say (lol, at least I didn't reference ewoks): 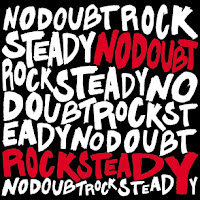 In which No Doubt do dancehall and techno but reveal themselves to be a great New Wave band: On "Don't Let Me Down" (produced by Ric Ocasek), they sound more like the Cars than the Cars. Bassist Tony Kanal compared Steady to Return of the Jedi: "It's, like, full of Ewoks. You know, just happy."
Read more: http://www.rollingstone.com/music/lists/500-greatest-albums-of-all-time-19691231/rock-steady-no-doubt-19691231#ixzz1l4ELTLbM
Posted by Katy at 11:39 AM No comments: