To be honest, I would have had a much better time trying to distinguish between ancient Chinese dialects than to distinguish between each track on this album.  I thought the same song was on repeat until I realized, after having listened all the way through the album several times that every song sounds unmistakably the same.  To complicate the issue further, the recording, albeit "digitally remastered" is horrendous enough that the static seems to become apart of the music so that it no longer stands out, like high fructose corn syrup in your tasty sparkling beverage.  Not to mention that Robert Johnson's "blusey" voice is so difficult to understand I think I only heard about three distinct words after tirelessly straining to decide if indeed English is the spoken language: Woman, Kitchen, and Blues.  Which, pardon my ignorance to this genre, isn't a recipe for interesting music to me (and honest people everywhere).

So, if the quality of sound, sound variance, lyrics, or catchy music isn't to blame for this album's startling 27th place spot, what on earth is?

So I looked him up.  I do this after I listen to the album.  I don't want what others have written before me to taint my virgin musical experience; nor do I want their biographical information to influence what I think of their music.  What I read was absolutely absurd.  Apparently, this dood sold his soul to the devil to be a "great" blues musician.  Epic Fail.  After achieving success and banging a lot of women (in worthless musician fashion) he was poisoned by a jealous person and the devil wanted his soul.  And then, somehow influenced every other musician who is/was worth a damn.  Just name your fav, s/he's on the list of groupies.  Because according to legend/typical groupie jargon, rock and roll couldn't have happened without Robert Johnson.

It reminds me of those self-righteous dickfarts I went to college with who claim that, "Without Beowulf, we mightn't have had such masterpieces as Lord of the Rings."  Well, we'd be much better off without both of them.  I day-dreamed of an interview with Miley Cyrus and she'd be all like "oh yeah, I couldn't have gotten where I totally am today had it not been for R. Johnson, homeboy show me love from hell, lol smiley wink face."

Just because something was created and it was the first (beowulf/king of the delta blues etc) doesn't make it art.  For serious.  Nobody likes primitive pottery.  We know nothing about the dark ages not because shit isn't there, but because it was boring shit and no self-respecting archeologist can lie long enough in his sad-faced office examining terra cotta crap his three-year-old could have made.  Had nobody like Clapton, Keith Richards, Bobby D and the like turned around and pointed fingers at this guy, would anyone know who he is?  Seriously?  Because this album was just total gibberish and whining.

But I could have lied like everyone else did.  Come on, admit it you music snobs, you totally don't go on a run or a car trip and get excited for "Moo cow's calf's baby mama blues in the kitchen. Woman." or whatever.

And if you don't believe that every song sounds EXACTLY the same, play the first 8 seconds of each recording before going to the next track.  it sounds like this on repeat: "Ber Ne Nurh Nurh Nurh dum dum bum bum bum... Mehehehehehe mamama in da kitchen!!!!!!  bur bur bur meeeeh mooo beeen so long" etc. etc.

But, I guess it is possible that without Robert Johnson, Dave Chappelle might have had a different opening for his short lived show of badassery.

Here is what the Mag says about Robert Johnson because they are all afraid of the devil: 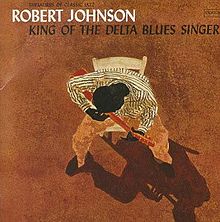 "You want to know how good the blues can get?" Keith Richards asked. "Well, this is it." The bluesman in question was Robert Johnson, who lived from 1911 to 1938 in the Mississippi Delta, and whose guitar prowess was so great, it inspired stories that, in exchange for his amazing gift, he had sold his soul to the devil. Johnson recorded only twenty-nine songs, but their evanescent passion has resonated through the decades. This initial LP reissue of Johnson's original 78s was a fountainhead for 1960s rockers such as Richards and Eric Clapton, who plundered it for covers. A better starting point today might be the recently released sixteen-track compilation King of the Delta Blues.Read more: http://www.rollingstone.com/music/lists/500-greatest-albums-of-all-time-19691231/king-of-the-delta-blues-singers-robert-johnson-19691231#ixzz1vXWA5o8M
Posted by Katy at 2:07 PM 3 comments: