Ever since I was a little kid, I thought Van Morrison was a black person because I couldn't imagine a world in which a white dood could sing with so much depth, meaning, and soul.  When I found out he was white a few years ago, it just freaking blew my mind.  no way; I envisioned him as this awesomely tall black man who held the mic with conviction while he rocked the gypsy outta everyone's souls.
This album stirred up so many memories of my childhood that I hesitated even writing a blog about it because nobody likes childhood stories.  They are awkward on such venues, but I'm all for awkward so here it goes:
When I began listening to the album and it got to "moondance," I recalled being about six-years-old standing on my dad's feet encased in cowboy boots (yes, we're from Texas, you wear boots with work clothes) insisting he dance with me when he would come home from work.  I remember the smell of the office--an acrid dry cleaning smell mixed with paper, ink, sand-weights that hold down large maps, and sterile air perfumed with fluorescent lights--on my father's starched shirts and the color of this little red pen he wore in his front breast pocket.
I remembered sneaking into mom and dad's bedroom while the album played so I could listen to "and it stoned me" alone under their bed while everyone else was in the living room.  They had "surround sound" back then and "OMFG" it would play in the back room if you hit the right button on the five disk cd changer.
I recalled "come running" and "crazy love" being played on the way to and from ballet lessons.  Everyone hated being around me when the album was on because I only ever wanted to hear "moondance."
When "into the mystic" came on, I recalled being 19 and watching my brother and sister-in-law dance alone together at their wedding reception.  and promptly downed two glasses of red wine because at that point in my life, love and marriage were illusions and stupid social constructions.
I think that Van Morrison is just good for the soul.  My new job has been very stressful and demanding of my time, emotional and mental stability.  It has required me to invent a personality in order to cope with the never-ending responsibilities and tasks asked of me.  The panic attacks and the utter terror I feel moments before I walk into the door, have been briefly subsided this week thanks to Van Morrison playing, "Brand New Day" on my drive to work; day in and day out as I bail out the titanic with a dixie cup, so to speak.
Van and I are the only people on the road at 6:30 am, and the only people leaving work around 8:00 pm, and I know I am lucky to have a job; and it could be worse, I have nothing but white-whines to share with all of you-- but for seventeen glorious minutes of my 24 hour day, moments of panic subside; for however brief, by the sound of a saxophone, a piano, a steady beat, and a voice that transcends my mind to places where the responsibility was not yet mine to fulfill; the weight of the world not yet on my shoulders, and the joy of dancing, of watching people dance, of hiding under a bed, of living in moments when life was not yet full of panic and terror begin to flashbulb into my head.  And then I pull into my parking space, take a deep breath, turn off the ignition.  The music ceases and whether I'm ready or not, I force myself to begin a Brand New Day.
What the people with less stressful jobs and all-you-can-take potty breaks have to say about Moondance: 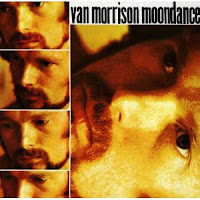 "That was the type of band I dig," Morrison said of the Moondance sessions. "Two horns and a rhythm section — they're the type of bands that I like best." Morrison took that soul-band lineup and blended it with jazz, blues, poetry and vivid memories of his Irish childhood, until songs such as the title track, "And It Stoned Me" and "Caravan" felt like a lucid dream. On the sprightly "Everyone," Morrison turns the title over and over in his mouth, not scatting so much as searching for the sound of magic. One song, "Into the Mystic," serves as an apt summary: To listen to the album is to get your passport stamped for Morrison's world of ecstatic visions.
Posted by Katy at 10:24 PM No comments:

If I haven't defined my term epic awesomeness, this album is a good definition for that phrase.  Although classified as Rock, methinks it is more of a mock-a cappella full of glam, gayness, piano and badassery (which are all synonyms, i know, god, stop reminding me).  Enough to inspire the Queen of Epic Awesomeness (Lady GaGa herself, my darling mother monster) to steal her name from the song "Radio GaGa" which is NOT on this album, but Queen needs to be recognized for inspiring the greatest artist ever.  But I'm biased.  I'm totally straight and I'd f*ck gaga even if she were wearing an outfit delicately comprised of ragged razor blades (not my original joke- I stole this from someone accusing me of obsession).

However, If Queen and Lady GaGa were to have sex, it might look like this amazing youtube video (if you inserted a piano and globs of mascara made from baby seal brains:
Totally Brill, I know.  But anyway, back to Queen.  So Night at the Opera JERKS you all over the place.  from driving cars, to dying on two legs, to lazing on a sunday afternoon, back to 1939, like you lived it and then--to this amazing song anyone who has seen wayne's world has a hard on for: Bohemian Rhapsody.

What is so AWESOME about Bohemian Rhapsody only applies to the percentage of people who dig Camusian shizzle.  Which is generally too many unhappy people in a population.  and mostly comprised of worthless liberal arts majors who can't understand Nietzsche well enough to dig harder core philosophy, like myself, or those in their last year of college who hope not to be a self-deprecating eff-tard who can't get published anywhere else but on a blog only her mother reads.  I digress...

The WHOLE song, in case you haven't noticed is a retelling of the stranger, i personally think.  So for all those people who sing along and think it's funny, you are misled.  totally sad song.  about a guy named Meursault who sucks at life like you do because you have nothing better to do than read this blog and await your death.  Now, I'm about to pretend to get really pedantic but not put a lot of substance into my thesis, so you can go ahead and leave all you non-english major peoplez. Your ignorance and lack of arrogance isn't welcome here.  and all you "gender studies people" can leave too.  but not because you're not ignorant or arrogant; but because nobody likes you.  and women just don't write as well as men.  in general.  so get over it and read some faulkner or proust.

but back to Queen and Albert Camus:

The song opens up like so:
Is this the real life?
Is this just fantasy?
Caught in a landslide,
No escape from reality
Open your eyes, Look up to the skies and see,
I'm just a poor boy, I need no sympathy,
Because I'm easy come, easy go, Little high, little
low,
Any way the wind blows doesn't really matter to
me, to
me


Alright so you can't really tell at first, but the chorus lets you know that it's someone who just goes with the flow... not sure if he's living or dead, doesn't seem to care "doesn't really matter. etc.  So prepare for captain obvious:

MAMA just killed a man,
Put a gun against his head, pulled my trigger,
now he's
dead
MAMA, life had just begun,
But now I've gone and thrown it all away
Mama, ooh ooh oooh ohh.., Didn't mean to make
you cry,
If I'm not back again this time tomorrow,
Carry on, carry on as if nothing really matters


So in the stranger, Meursault kills this arab guy on the beach and his excuse is that it's kinda hot, and the sun was in his eyes.  and he's all like "mama, blah blah" and in the book, i mean his mother is dead on the first page and all, but when he's tried, he's more or less convicted for not crying at his mom's funeral. so his conviction is tied to his lack of sympathy for his mother's death.  and carry on, because, yeah, nothing really matters.

Too late, my time has come,
Sends shivers down my spine, body's aching all
the time
Goodbye, ev'rybody, I've got to go,
Gotta leave you all behind and face the truth
Mama, ooh, I don't want to die,
I sometimes wish I'd never been born at all


pretty into the "physical"  shivers down spine, body's aching all the time.  he says goodbye to everyone because he's going to go to jail and be on trial.  whether he's living or dead, it doesn't really matter, might as well not have been born at all.

And here is the trial:

People in the trial are jabbering back and forth about nothing having anything to do with the murder.  let him go, don't let him go.

And now the rebellion, after he accepts his fate of death:


nuff said.  then he dies.  any way the wind blows.

But here's what RS had to say: 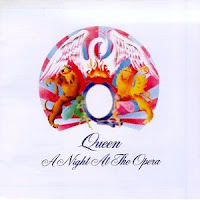 "Queen will be the Cecil B. DeMille of rock," proclaimed singer Freddie Mercury, and this is where the band let its over-the-top tendencies loose, with heavy metal ("Sweet Lady"), pop ("You're My Best Friend)" and the most operatic of all rock songs, "Bohemian Rhapsody."
Posted by Katy at 8:15 PM 1 comment: