If The Sound and the Fury didn't convince me that having mommy issues could seriously eff you up, this album totally did.

When this album came out, my brother came into my room and whispered, come to the grocery store with me, I just bought the new Eminem album and you have to listen to it.  In his truck, he handed me the cd, and I took out the booklet and followed along with his lyrics to "White America."  We were Shady's perfect target audience, 15 and 19, white American kids, blond, blue eyed, upper middle class.  I felt sinful just holding it, and even at 15 I knew Eminem was talking directly to me.  I shuddered as he accused me of putting his lyrics up under a microscope to uncover a layer of anger and disfunction I never knew existed (how did he know I was so nerdy to read along??) and I sat with an open mouth as he talked about creating an army to march to the steps of congress and piss on the lawns of the white house.

Excellent.  Where do I enlist?  Come on, Marshal, where was your burly black recruiting officer sipping Hennessy and smoking a joint at my high school's college fairs?

If you haven't listened to White America, by all means, click on the link above.  I think it's more important now than it was 11 years ago.  And because I feel this anger more NOW than I did as a teenager, I suppose the public education system is better off without me.

He was the unheard voice of our generation, I fear.  But make no mistake, he was the voice of our generation.  This album provoked so much political anger, but I believe it fell on deaf ears (in Texas, anyway).  Ironically, it's so anti-Bush and anti-War, even though it's through a medium of endless anger and frustration.  In the song, "Square Dance" he accuses us of being at band camp and unconcerned about a draft to go fight in Iraq for the government (see lyrics below).  For someone who was born in around 1973, perhaps this seems like a concern.  But for those of us who were in High School during the time of 9/11, I would say, you were made fun of if you didn't want to enlist right out of High School to go kill "those bastards who did that thing to them towers I didn't even know existed until September."  He could have been our Bob Dylan, he pretty much was, minus Peace and good drugs like Acid, but instead everyone from our generation are wild Snorlax(es? Snorlaxi?) and would rather bury their heads in the sand, or just blindly trust institutions.

Some choice lyrics from "Square Dance:"

Yeah the man's backWith a plan to ambush this Bush administration,Mush the Senate's face in and push this generation,Of kids to stand and fight for the right to say something you might not like,This white hot light,(...)Yeah you laugh till your motherfuckin' ass gets drafted,While you're at band camp thinkin' the crap can't happen,(...)All this terror America demands action,Next thing you know you've got Uncle Sam's ass askin'To join the army or what you'll do for there Navy.You just a baby,Gettin' recruited at eighteen,You're on a plane now,Eating their food and their baked beans.I'm 28,They gonna take you 'fore they take me

And here we are, bankrupt, unemployed, vaccinated, fluoridated, addicted to adderall, and bored.  You don't need a draft if everyone wants to join the U.S. army, Mr. Slim Shady...sad, but troof, my wigga.  It's ok, America loves to prosecute anyone who incites independent thinking.  (cough Julian Assange cough Alex Jones cough).

Change of subject--Eminem also consistently gets flack for being a misogynist.  Writing songs about murdering ex-wives, beating women, killing his mother, yadda yadda.  Let me give you a spoonful of perspective, from a female's point of view.  Homeboy has serious abandonment and Mommy issues.  Just listen to Cleanin' Out My Closet and remember the valuable lesson we all should have learned from Frankenstein, if anyone actually reads anymore; and it's that monsters are created by society, not born.  His song about his anger towards his mother is no different from Sylvia Plath's anger aimed at her father in the poem, "Daddy" where she calls her father a bastard and a fascist.  But we call her a "feminist confessionalist poet."  And talk about her as "groundbreaking" for women's rights and the confessionalist movement in poetry classes.  I smell a double standard.  But maybe nobody reads poetry anymore either, so all those incensed by Eminem probably don't know about her...Neither actually killed their parents, but both are metaphorically burying a past (and the offending parent) they'd have been better off without.  It's called M.E.T.A.P.H.O.R., try to say it again-- Meeeetttttttaaaaaaaaaaappppphhhhhhooooorrrrrr.

and as Em says, "If my lyrics were literal, I'm a criminal, how the FUCK could I raise a little girl?"

Not to mention that when women kill in music and movies, it's sexy.  See this ending snapshot from Lady Gaga's Bad Romance music video where she freaking burned some dood.  But she's not known for being a man hater, is she?:

In Marshal's own words on his "Sing for the Moment" song:

They say music can alter moods and talk to youWell can it load a gun up for you , and cock it tooWell if it can, then the next time you assault a dudeJust tell the judge it was my fault and i'll get sued

His music is an expression of anger, a confession- not unlike Plath's poetry, to uncover the depths of his anger, and raw unadulterated emotion.  It spills out of him with perfect rhyme and meter, layered with metaphor and symbolism, and it probably feels good, like inhaling after being under water for a minute.  He really is a lyrical genius.  I suspect he has fragments of Shakespeare's soul locked up in some of his brain cells.  Eminem explains in the lyrics I chose above that, yes, he understands his music can alter your mood, but don't prosecute him for your life choices.  Are we going to sue the creators of the Batman Trilogy for James Holmes's decision to shoot up a theatre too?

In fragments from the Preface of The Picture of Dorian Gray, "There is no such thing as a moral or an immoral book.  Books are well written, or badly written....No artist is ever morbid.  The artist can express everything,"  as Oscar Wilde once put it.  So I say, leave Eminem alone.  His songs are beautifully written, regardless of content.  And who wouldn't envy someone who can stand up and scream and feel no end to the depths of human emotion?

Bravo, Mr. Mathers.  Badass Album.  I don't think you're on the "updated" 500 album list, Em, but this is what Rolling Stone Mag had to say about you on their "100 greatest albums of the 2000s" or whatever.  If you want to see my brief rant about how Rolling Stone changed and updated their list, please click here.  (sorry, slim, you were replaced with the Pixies, of all bands.)

Otherwise, this is what somebody wrote about The Eminem show: 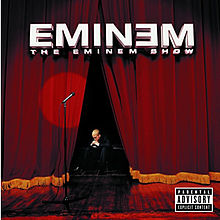 On his third album, Eminem shifted from provocation to introspection, mulling fame, fatherhood and the psychic toll of being America's biggest pop star and – according to scolds on both ends of the political spectrum – number one moral menace. The rhymes were as densely packed and virtuosic as ever ("When I speak, it's tongue in cheek/I'd yank my fuckin' teeth before I'd ever bite my tongue"), but they were also poignantly confessional; the beats largely jettisoned perky hip-hop to embrace the power chords and grandeur of Seventies rock.
Related:
• Rolling Stone's Original 2002 Review
• Rolling Stone's 500 Greatest Albums of All Time: Eminem's 'The Eminem Show'
• Eminem: A History in Photos
Read more: http://www.rollingstone.com/music/lists/100-best-albums-of-the-2000s-20110718/eminem-the-eminem-show-19691231#ixzz235HeaJLn
Posted by Katy at 1:57 PM 1 comment:

I have a bone to pick with you, Rolling Stone

Alright, I am sorry that I didn't post a blog for July.  I don't have a great excuse, but plan on doing two albums this month to make up for it.  Actually, getting married in 16 days should be a good enough excuse, but on top of finalizing a wedding, I will try to squeeze in two albums.  You see, I am just a little annoyed with Rolling Stone.  They decided, out of nowhere to change their top 500 album list.  I noticed this when I posted the George Harrison blog that on my printed copy from a year ago where I highlight each album I've listened to, it clearly said "All Things Must Pass" was #437, but when I checked the Rolling Stone website, it listed it as 433.  Conundrum.

I was befuddled and annoyed.  I'm not a super type-A personality, but when you throw a wrench in my plans, I will fucking kill you.

So the next album that I have been listening to is "The Eminem Show" by Eminem, of course.  If you ever want to blow off steam, Mr. Mathers is your man.

But when I checked to see what number he had been moved to, I think they took him straight off the list.  They only have his other album on there (please correct me if you wish to click through their updated list of 500 and let me know if you see The Eminem Show listed anywhere else).  So after one whole month of analyzing his anger, I had to decide what to do.

So, here is what I am going to do.  I am going to stay true to the original list that I printed off.  The original one published in the paper version of Rolling Stone Magazine in 2003.  When I notice that an album has been moved, I will provide the changed rank in parenthesis.

I am pissed.  I still have 400 something albums to go, and they will probably change the list in a few more years anyway, so this is the only thing that makes sense.  When I've completed the original list, perhaps I will add in the new albums, but I will probably be bored with this project when I am 40, have 3 kids to homeschool and live in the middle of a forest.  Don't laugh at me; have fun falling from your corporate ladder.  elle oh elle smiley wink-face.

Is it just me, or is it also scary that on the interwebz, you can update something like a list and not tell anyone and then all the history of what it used to be is lost and gone forever unless you're a distrusting person like myself and printed out the original?  cough*1984*cough

So thanks Rolling Stone for this snafu.
Posted by Katy at 10:24 AM 1 comment: