There are two mirrors in my place that face each other and when I stand in front of this domestic concept of infinity, I wonder how many other souls came before me to be vibrated between them like a ball on a never-ending ping pong table.  There I was this morning and tomorrow morning forever reflected, and forever forgotten in the bright moment when I simply step in and out of their battle field visions.

I walked on battle fields and my ancestors' cemetery in breathless fall in the deep south through a labyrinth of forgotten guts.  No music.  No cell phone.  Just the beat of my rapid heart and the thrumming hearts that once ago stopped all around me in another time.  Swirling mist raptured down the streets in cold blasts rolling over beds of crunching golden leaves, encasing the accidental pearls on spiderwebs beneath every rowed mailbox.  But all this was in silence.  It will happen next year, this rolling fog I've never seen before.  It happened decades ago before rowed mailboxes, where men poured out the blood that paved these streets in Civil War.  Some of that blood is mine.

As I stood in a very old family cemetery, I thought about how blood connects us, begins life, stops life, lets us know when new life doesn't exist inside us.  It's hot and sticky and smells like the iron skins of the earth we mine and is layered with carnal knowledge; it knows to return to earth when we die.

I went without music for months.  It is hard to clear one's mind when it is shrouded with distraction and the involuntary downpour of emotional turmoil music tangentially brings.  I had wandered into my own labyrinth encompassed with fog and it never occurred to me how deeply lost I was until I finally faced my largest fear and watched Stanley Kubrick's The Shining as an adult- the only movie that is a labyrinth inside a labyrinth of its own.  Not unlike every breathing individual.  I saw portions of this movie with my brother, accidentally - and without even understanding it, my precocious eight-year-old brain unconsciously understood that we are all incredibly alone, always.  And nobody, not even our parents can save us from the buried past karmically pulsating through our borrowed veins, the layered past in our minds from lifetimes ago, and the unbridled civil wars that rage ever on and on in the minds of the people we love and perceive to know.  And it took almost a decade for me to be able to sleep normally after my first encounter with Kubrick because of the amount of panic and cold sticky terror that hovered over my dark room at night as a child like the stale, incarnadine fog that rolled down Tennessee hills years after a raging war, this unconscious force of past and future, this crimson wave of death that flushed through the hotel in a movie and entered the audience - this ominous symbol begging itself from beyond eternity to imprint in my skulled labyrinth for future reference.  Your premonition.  My premonition.  Wake up.

How long have I been sleeping?

Because it was the future for which I was afraid; although I couldn't yet know it.  Alas, forgotten.  Like an Indian Burial ground, or the murder of one's family with an ax, or a civil war battlefield where a Panera Bread now stands.  Doomed to be repeated.

We listen to albums, watch movies and read books because we identify with something sleeping just below the surface of us all; something encapsulated that exists within our beings rather than without.  The essential question of who am I and what am I doing here?  We search for guidance from beyond without knowing for which path we are to take, which direction do we turn, are we the hero this time, or the scoundrel?  Are we the child waiting for an abrupt rape of our innocence?  My experience of watching The Shining as an adult awoke something of clarity inside me.  For a movie that probably confuses everybody, it brought the taste of lucid, sweet sanity to my life.  Crisp and clear like the pearly dew-beads on spiders' webs, a life-force of water outlining a trap I should have seen.  I remembered the day I scrambled backwards up the stairs when I watched Wendy do the same as Jack screamed, "Do you have any idea what a moral and ethical principle is?!" I began to notice the ax that marked the exit to the room where mysterious tinkering happened into the night for no various purpose at all- "all work and no play makes Jack a dull boy."  And in that scene, suddenly the air around me became heavy and I could recognize the feelings of distrust and dislike for me or any new comer or anyone in the vicinity at all.  The paranoia that for some reason deserved reverence began to breathe down my spine.  Suddenly millions of eggshells appeared on cold concrete floors.  I could taste my constant feeling of dread and anxiety metallic like blood, and I remembered the countless dreams I would have about trying to scream but no sound would come out.  And the isolation, the isolation, the fucking isolation oppressive like quicksand.

I felt like Danny, standing in front of a mirror (or two) watching the blood of the past and the future fill up my house awakening in me the time I watched this movie as a child but couldn't yet understand.  Do we disobey and unlock the room 237 of our minds? Yes.  Break every egg shell; unlock every door; pry into the buried past; the burked future; and battle the proverbial minotaur, Jack, in the labyrinth of your archetypal journey.

And closer to Bluebeard's last wife than Browning's "Last Duchess" I left.  And started a new life.

I tried several albums for what I've been through but nothing seemed to fit.  Normally, I just randomly pick an album and allow it to be on in the background all month; but I couldn't do that this time because if I touched too deep a nerve, the volcano of emotion wouldn't be worth this project.  I tried to remember how I felt at the height of my alienation, but so much memory escaped me like water running through my fingertips.  Then I recalled this scene from Taxi Driver.  Where Robert de Niro holds a gun to his head as he watches a couple dance on screen.  I've felt that disconnect before.  What was that song, I thought.  It resonated something deep within my gut- the labyrinth within.  Whatever song that was would be the album for this piece.  When I found it and listened to "Late for the Sky" not a single other album would do.  I just had to wait for the right moment to let it hit me.

The album differs from other break up albums because it is so specific in the idea of feeling completely alienated from the other person.  There doesn't seem to be the same sort of denial, sorrow, anger, one gathers when they listen to Joni Mitchell, Bob Dylan, or Fleetwood Mac.  It jumps into moments that make you feel that two people are coexisting and yet living two completely different realities.  The individuals cannot comprehend, connect, or truly understand the other no matter how many times they discuss the issues.  The extreme disconnect and alienation resonates well with the Shining.  All these people coexist, yet are going crazy in their own way because of the concept of "pastness in general."

Such an empty surprise, to feel so alone.

What Rolling Stone thought of Jackson Browne's Late for the Sky: 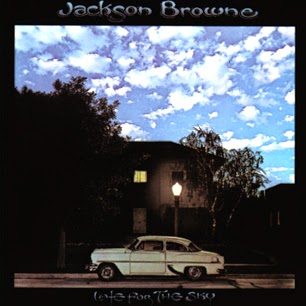 Asylum, 1974
On his dark third album, Browne explored, in the words of one Rolling Stone reviewer, the "romantic possibility in the shadow of an apocalypse." There's an undercurrent of dread on Late for the Sky, from "Before the Deluge" to "For a Dancer" – not to mention a lot of obvious songwriting genius.