I don't think you can just like the Grateful Dead.  I think that the correct interpretation for the meaning of "like" when dealing with the Grateful Dead is that you are somewhere on your journey to becoming a Deadhead.  You might not officially be one, but once you've been exposed, you are inevitably on your way.  If you die before fully becoming indoctrinated into its awesomeness, Jerry Garcia and all his laid-back fandom would probably say, "sucks dude, you totally ran out of time in this life.  Maybe on your next journey through the cosmic void, a Deadhead you will become."

Now, unlike all other bands, there is a cult following to this one that outdoes the cult following of even the most hardcore World of Warcraft Fans.  When you hear two deadheads engulfed in a conversation, it's almost like they are speaking a different language between dropping phrases like "the pizza tapes" or "naw dood, nothing beats Attics of my life from the live concert of June 1970 man."  The second part I made up, please, brother, don't crucify me if that's an incorrect statement.

My brother explained that The Grateful Dead is a way of life and wished me luck and best of karma on listening to the American Beauty album.  He hyped them up so much that when I heard the album for the very first time on my drive to work, I was... well, I was a little let down.  Maybe not let down, but certainly underwhelmed.  I stuck with it though.  I kept them on as background music, stole a pair of speakers from an empty office, played them so low I couldn't hear them if I moved or rustled paper, even just a little...

Then, although my ears had already warmed up to the album for a whole day on repeat, I heard "Ripple" for the first time.  I sat quietly at my desk and I let the song inundate me with peace.  Then, on my drive home, I turned up the volume and played Ripple over and over with the windows down.  I was so strongly reminded of the moment when I read Faulkner for the first time.  I was so obsessed with Charles Dickens and the Victorians, and others who perfected the classic novel, that when I read something that was so out of this world, and yet so real at the same time, it blew my mind open.  When I read my first Faulkner novel, I remember looking up after a paragraph and shaking my head in disbelief.  Then reading parts outloud to myself, just to hear how it rolled off the tip of my tongue.  I couldn't believe that someone could reinvent something so straightforward as a novel.  And then heighten its importance in the world and how we think of our life's purpose and those around us.

And then I understood.  The Grateful Dead is a mantra; it's a reinvention of the band.  Here's a band that makes you feel good because the tunes are happy, they are singing their feelings out, and not in a way that makes you identify with a song in the classic sense, but in a way that takes you to another place mentally.  You can leave the world without leaving it and feel good in the process.

I thought, if I die, I'd like Ripple to be played at my funeral.  Then I thought, naw, I can't do that, I'm not a Deadhead; other Deadheads would be snobby and turn their noses up at me.  But that's not who Deadheads are.  They're not like Eric Clapton fans--who totally suck, ps.  I really haven't met a Clapton fan I truly liked or admired.  Dead fans accept you no matter where you are on your Deadhead journey.  Just as long as you share your drugs.

Here are some good Deadhead resources, for the veterans and the neophytes:
The Deadpod
Deadlistening

What the Rolling Stone Mag had to say: 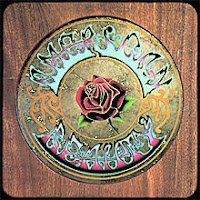 Warner Bros., 1970
The Dead were never better in the studio than on the down-home stoner country of American Beauty. Released just six months after the folky classic Workingman's Dead [see No. 264], it has some of the band's most beloved songs, including "Box of Rain" and "Friend of the Devil."
Read more: http://www.rollingstone.com/music/lists/500-greatest-albums-of-all-time-20120531/grateful-dead-american-beauty-20120524#ixzz2CRs3CyW3